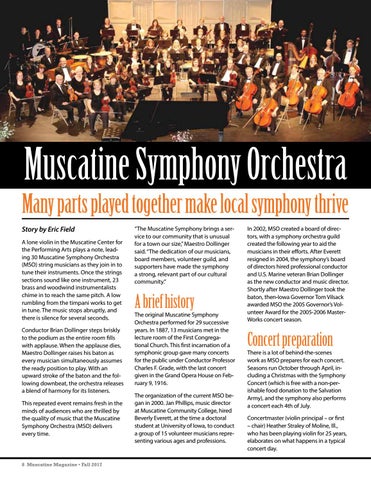 Many parts played together make local symphony thrive Story by Eric Field A lone violin in the Muscatine Center for the Performing Arts plays a note, leading 30 Muscatine Symphony Orchestra (MSO) string musicians as they join in to tune their instruments. Once the strings sections sound like one instrument, 23 brass and woodwind instrumentalists chime in to reach the same pitch. A low rumbling from the timpani works to get in tune. The music stops abruptly, and there is silence for several seconds. Conductor Brian Dollinger steps briskly to the podium as the entire room fills with applause. When the applause dies, Maestro Dollinger raises his baton as every musician simultaneously assumes the ready position to play. With an upward stroke of the baton and the following downbeat, the orchestra releases a blend of harmony for its listeners. This repeated event remains fresh in the minds of audiences who are thrilled by the quality of music that the Muscatine Symphony Orchestra (MSO) delivers every time.

“The Muscatine Symphony brings a service to our community that is unusual for a town our size,” Maestro Dollinger said. “The dedication of our musicians, board members, volunteer guild, and supporters have made the symphony a strong, relevant part of our cultural community.”

The original Muscatine Symphony Orchestra performed for 29 successive years. In 1887, 13 musicians met in the lecture room of the First Congregational Church. This first incarnation of a symphonic group gave many concerts for the public under Conductor Professor Charles F. Grade, with the last concert given in the Grand Opera House on February 9, 1916. The organization of the current MSO began in 2000. Jan Phillips, music director at Muscatine Community College, hired Beverly Everett, at the time a doctoral student at University of Iowa, to conduct a group of 15 volunteer musicians representing various ages and professions.

In 2002, MSO created a board of directors, with a symphony orchestra guild created the following year to aid the musicians in their efforts. After Everett resigned in 2004, the symphony’s board of directors hired professional conductor and U.S. Marine veteran Brian Dollinger as the new conductor and music director. Shortly after Maestro Dollinger took the baton, then-Iowa Governor Tom Vilsack awarded MSO the 2005 Governor’s Volunteer Award for the 2005-2006 MasterWorks concert season.

There is a lot of behind-the-scenes work as MSO prepares for each concert. Seasons run October through April, including a Christmas with the Symphony Concert (which is free with a non-perishable food donation to the Salvation Army), and the symphony also performs a concert each 4th of July. Concertmaster (violin principal – or first – chair) Heather Straley of Moline, Ill., who has been playing violin for 25 years, elaborates on what happens in a typical concert day. 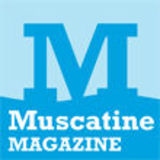