Publications Ex-editor of A:1 Magazine

The leading idea of the project is to link the existing and the new-desiged building which located in a place that is very similar to a square in fact. This kind of problem leads to thinking: if to build, how? The solution was found in the extension of the public function of the building than we can give back to the community, its potential community center.

Concerning the issues of shaping, everything is less and less clear: function dictates buildings form, with sufficient insolation and comfort employees. As mentioned above, the existing square also dictated to us its condition: basis the existing ways of transit of people have become a cornerstone in the location of the building. The project is the focal point of the city, because of its design, design methodology and its potential impact on the city.

Solar panels are the most effective method of passive cooling. Most of the sun's rays stop even before entering the building, and the presence of a gap between the facade and the sunscreen provides air circulation

The structural system of the building is a steel frame using I-beams, I-pillars and composite ceilings.

The concept of a kindergarten on an urban unfinished site, on Yurkovskaya street 3 for 120 children. Challenge: Formation of a secure space with an internal extension. All rooms are maximally permeable and well insulated, service rooms are concentrated to the north.

Most of the premises are occupied directly by the premises of the kindergarten, also represented: an entrance-representative zone, a zone of technical premises that limits the territory from the north, with an assembly and sports hall built on top of it.

Facades are made using recycled plastic lamellas and with vertical division using brick pilasters. Large windows add expressiveness to the building and provide it with plenty of light in the daytime.

The volume of the building is 5 blocked cells, which include 5 groups of graduated by age childrens.

Hight-rise building 24 storey building with 4 terraces. The selected structural system is a reinforced concrete rod with a steel structure suspended on it. The steel structure is a truss, forming a console that hold the weight of the floors on itself Lamels in the building cover from overheating in the hot season. On the terraced floors there are technical rooms and recreation areas

A typical floor will include 11 apartments located in 1000 square meters. Layouts of apartments are focused on bedrooms, which are the basic unit, when counting rooms.

The school building lies on a complex terrain in the suburbs of Kiev. Since the site imposed restrictions on the formation of the volume of the school, it was precisely because of the lack of space that the building took on this form.

The zoning of the school is determined by the number of storeys, the first floors are occupied by the primary classes of the second and third - middle, 4 final classes. There is also a library on the 4th floor. In the north, on the ground floor there is a gym, above it an audience. Classes are located with an orientation to the southeast, east.

Today, the museum building includes the main building of the eighteenth century, and an extension built at the beginning of the twentieth century. Since there is a need to expand the museum territory, to increase the area of the exhibition. Therefore, the concept proposed an additional building that connects the building through the terrace.

The new building also includes a terrace and recreational areas. The Kremenets Local history museum is one of the most popular architectural monuments of the city; it needs renovation, rethinking of the existing and expansion.

On the site of the existing construction of the 90s, it is planned to place the building of a new exhibition and recreational areas. under the museum building it is proposed to place a cafe area and green areas.

The new form is implemented using an algorithmic approach, an attractor that sets the movement in the direction of the central building. Thus, a merger takes place, a symbiosis of the decrepit form of existence and the new form. 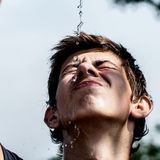