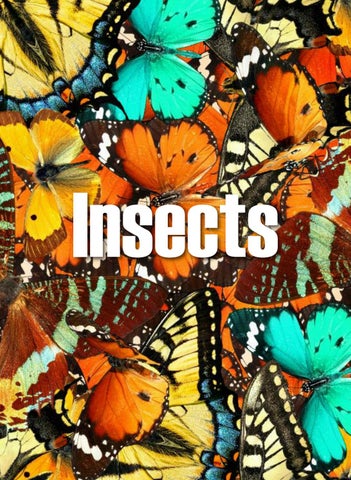 All rights reserved. This publication or any part thereof may not be reproduced, stored in a retrieval system or transmitted, in any form or by any means, electronic, mechanical, photocopying, recording or otherwise, without the prior written permission of the copyright holder. Author : Peter Murray : Images: Shutterstock

The author and publisher have made every effort to ensure the information contained in this book was correct at the time of going to press and accept no responsibility for any loss, injury or inconvenience sustained by any person or organisation using this book.

The tansy beetle is a species of leaf beetle. It measures 7.7â&#x20AC;&#x201C;10.5 mm in length and has a characteristic bright metallic green colouration. The common name derives from the tansy plant on which they often feed as both larvae and adults. In the United Kingdom it is designated as 'Nationally Rare' and this localised population, centred on York, North Yorkshire, has been the subject of much recent research.

The Colorado potato beetle is a major pest of potato crops. It is approximately 10 millimetres long, with a bright yellow/orange body and five bold brown stripes along the length of each of its elytra. Native to America, it spread rapidly in potato crops across America and then Europe from 1859 onwards.

The Rhe red wood ant is a boreal member of the Formica rufa group of ants. It is native to Europe and Anatolia but is also found in North America, in both coniferous and broad-leaf broken woodland and parkland. Workers are bicolored red and brownish-black, with a dorsal dark patch on the head and promensonotum, and are polymorphic, measuring 4.5â&#x20AC;&#x201C;9 mm in length. They have large mandibles and like many other ant species they are able to spray formic acid from their abdomens as a defence.

Buprestidae is a family of beetles known as jewel beetles or metallic wood-boring beetles because of their glossy iridescent colors. Larvae of this family are known as flatheaded borers. The family is among the largest of the beetles, with some 15,500 species known in 775 genera.

The housefly is believed to have evolved in the Cenozoic era, possibly in the Middle East, and has spread all over the world as a commensal of humans. It is the most common fly species found in houses.

Jumping spiders are a group of spiders that constitute the family Salticidae. As of 1 February 2019, this family contained 636 described genera and 6115 described species, making it the largest family of spiders at 13% of all species.

The rose chafer or the green rose chafer, is a beetle, 20 millimetres long, that has a metallic structurally coloured green and a distinct V-shaped scutellum. The scutellum is the small V-shaped area between the wing cases; it may show several small, irregular, white lines and marks.

Flower chafers are a group of scarab beetles. Many species are diurnal and visit flowers for pollen and nectar, or to browse on the petals. Some species also feed on fruit. The group is also called fruit and flower chafers, flower beetles and flower scarabs.

Megachilidae is a cosmopolitan family of mostly solitary bees whose pollen-carrying structure is restricted to the ventral surface of the abdomen.

Ctenizidae is a small family of medium-sized mygalomorph spiders that construct burrows with a cork-like trapdoor made of soil, vegetation and silk.

A bark beetle is one of about 220 genera with 6,000 species of beetles in the subfamily Scolytinae. Traditionally, this was considered a distinct family Scolytidae, but is now understood to be very specialized members of the "true weevil" family. Bark Beetle Tomicus destruens. Egg, larva, pupa and adult beetle. Young and mature stages of development.

The honey bee is known for construction of perennial, colonial nests from wax, for the large size of their colonies, and for their surplus production and storage of honey, distinguishing their hives as a prized foraging target of many animals, including honey badgers, bears and human hunter-gatherers. In the early 21st century, only seven species of honey bee are recognized, with a total of 44 subspecies,

The owl butterflies, are known for their huge eyespots, which resemble owls' eyes. They are found in the rainforests and secondary forests of Mexico, Central, and South America.

Dasyscolia ciliata is a species of scoliid wasp found throughout the Mediterranean. It is the only known pollinator of the European Ophrys speculum. The male wasp is tricked into pollinating the Ophrys orchid by mimicking the female wasp in appearance and scent.

The Hemiptera or true bugs are an order of insects comprising some 50,000 to 80,000 species of groups such as the cicadas, aphids, planthoppers, leafhoppers, and shield bugs. They range in size from 1 mm to around 15 cm, and share a common arrangement of sucking mouthparts.

The firebug is easily recognizable due to its striking red and black coloration, but may be confused with the similarly coloured though unrelated Corizus hyoscyami.