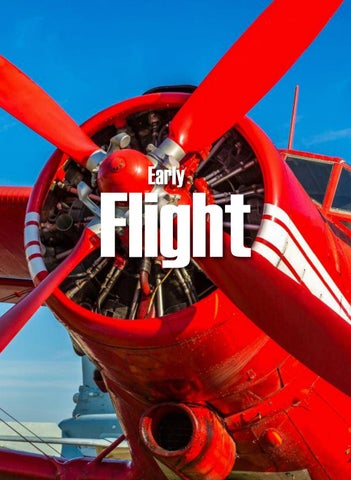 All rights reserved. This publication or any part thereof may not be reproduced, stored in a retrieval system or transmitted, in any form or by any means, electronic, mechanical, photocopying, recording or otherwise, without the prior written permission of the copyright holder. Author : Peter Murray : Images: Shutterstock

The author and publisher have made every effort to ensure the information contained in this book was correct at the time of going to press and accept no responsibility for any loss, injury or inconvenience sustained by any person or organisation using this book.

To fly through the air, to harness the power and freedom of the birds. This was mankindâ&#x20AC;&#x2122;s dream and desire, most arguably, since crawling out of the primordial ooze. It would be centuries before that dream would come true. Aviation, itself, has only been around, in aircraft form, since 1900. The first airplanes initially were crude machines without much use, or perceived use. In a short 10 years after 1903, starting with World War I, aircraft became very useful and integral to war efforts. A newer design would quickly replace and cause the earlier design to become obsolete, in a matter of months, or within a year. This obsolescence of aircraft repeated during World War II, and later during the Cold War.

This WWI plane, developed by the French, manoeuvred expertly and had an excellent rate of climb. This plane was considered a â&#x20AC;&#x2DC;sesquiplaneâ&#x20AC;&#x2122; because of its additional half wing, which is what allowed it to have such a unique climb rate. The Germans were so impressed by the plane that they attempted to copy the design. The maximum speed for the Nieuport 17 was 110 mph, and it was armed with 2 machine guns.

The Albatros D.V was produced by the Germans in 1917 in support of the first world war. Nearly 2,500 were built despite the aircrafts obsolescence. The Famous German pilot Manfred von Richthofen described the aircraft as slow to manoeuvre. The Albatros had a max speed of 116 mph (typical of aircraft of the era) and carried 2 machine guns.

The Polikarpov I-15bis was produced by the Russians in 1939 just before the second world war. Nearly 3,300 were built from 1934 to 1937. The design had an engine produced by the United States and later was replaced by a Russian engine. The popular aircraft was unfortunately not able to stand up to the new design of aircraft and the looming war. The max speed of the Polikarpov I-15bis was 220 mph and carried 4 machine guns and 6 rockets.

A WWI biplane fighter, this British aircraft was built by the same company that designed the Sopwith Camel. While it wasnâ&#x20AC;&#x2122;t as fast as other planes built during its time, it was extremely agile and had a better than average climb rate. The plane could reach a speed of 121 mph, and was armed with 2 machine guns, and 4 bombs.

The Sopwith Pup was one the first British fighter aircraft to be manufactured. They served the British for a few years starting in 1916. Aviation was fairly new, thus the design of the aircraft was quickly outclassed by newer designs. The Pup was used on aircraft carriers and flew at about 110 mph for about 3 hours. The Pup carried one machine gun, which fired the bullets between the propeller blades due to an invention that synced the engine with the gun. Almost 1,800 were built between 1916 and 1918.

The Sopwith Dolphin was produced by the British during WWI. Due to the aircraftâ&#x20AC;&#x2122;s high altitude performance, it was used as an interceptor against German reconnaissance aircraft. Nearly 2,000 were built but were quickly obsolete after WWI. The max speed of the aircraft was 131 mph

The Supermarine Seafire was developed so that the naval aircraft carriers in the UK could include a version of the Spitfire that would operate well over the ocean. The plane was developed for use in WWII. The Seafire proved to be formidable against the Japanese Zeroes in low altitudes. The maximum speed for this aircraft was 359 mph, with an armament that included 2 cannons, and 4 machine guns.

The de Havilland Vampire was a British made jet that was developed for WWII. However, it took so long to develop and produce that it was nearly 1945 before it rolled off the tarmac. It was used as a fighter plane until 1953 when it was relegated to pilot training. It was the first jet that managed to travel the entire Atlantic Ocean. This planeâ&#x20AC;&#x2122;s maximum speed was 548 mph, and it was armed with 4 machine guns, 8 rockets, and 2 bombs.

The Nakajima Ki-84 Hayate was used by the Japanese during WWII. The Allies called it â&#x20AC;&#x2DC;Frankâ&#x20AC;&#x2122;. This was one of the best fighters to see large combat sorties. This was a relatively small craft, and needed a lot of maintenance. This made it difficult as the war raged on. The maximum speed of the plane was 426 mph, and it was armed with 2 machine guns, 2 rockets, 2 bombs, and 2 drop tanks.

Designed by the British Aeroplane Company in 1937, this plane was used in WWII. The Bristol Blenheim was one of the first planes to feature an all metal-stressed skin landing gear that was retractable, and variable pitch propellers. This plane was very fast for its class, but could not outrun the German Messerschmitt Bf 109 in the daytime. The maximum speed reached 266 mph, and it was armed with 4 machine guns, and 6 bombs.

The McDonnell Douglas F4H Phantom was developed out of the cold war and was produced by the United States. This aircraft is so popular that it is still in service today. Nearly 5,200 have been built from 1958 to 1981. The Phantom was used extensity in the Vietnam war for many roles for both the Navy and Air forces. The Phantom had a top speed of 1,472 mph and a combat range of 367 miles. It carried missiles and later in the war, a machine gun.

The North American F-86 Sabre, nicknamed the Sabrejet, was one of the first transonic jet fighters produced by the US for use during the Korean War. One of the most notable features of this plane was its distinctive swept wing. This mimicked the Soviet MiG-15 developed by the Soviets. Nearly 9,860 planes were produced, and were utilised by other countries including Australia, Canada, and Japan in later years following the war. Its maximum speed was 687 mph, and it could fly nearly 1,500 miles. It was armed with 6 M3Browning machine guns, and at least 2 rockets or bombs.

The Grumman F6F Hellcat served in WWII with the navies of the United States, Britain, and France. Nearly 13,000 Grumman F6F Hellcats were built between 1942 and 1945. Ff these, 12,000 were built in last two years of the war. The F6F was a simple design which helped maintain air superiority in the Pacific theatre. This distinction may have also helped with having downed more enemy aircraft than any other carrier based aircraft. The typical Grumman F6F Hellcat had a maximum speed of 330 mph, and carried up to 6 machine guns and rockets, torpedoes, or bombs.

Lockheed P-80 Shooting Star The Lockheed P-80 Shooting Star was the first jet aircraft used by the United States Air Force just after WWII. The design of the aircraft was available at the end of the war but not in production. Unfortunately for the P-80 Shooting Star, the new technology of the jet engines and sweep wings, quickly made the design obsolete in just a few years. Nearly 1,700 were built. The P-80 was able to fly at a max speed of 600 mph; a remarkable speed for a first generation of jet aircraft. The P-80 carried 6 machine guns, rockets and bombs.

The Mikoyan-Gurevich MiG-29 was produced by Russia in the late 1970s and is still in production. The MiG -29 was viewed by many as one of the best fighter aircraft in the modern era, and is operated by many different counties. Nearly 1,600 MikoyanGurevich MiG-29 have been built since 1977. The typical MiG-21 has a maximum speed of 1490 mph and carried one cannon, missiles, and various types of rockets.

A short 100 yearsâ&#x20AC;&#x2122; worth of history shows the drastic change and technological improvements of aircraft. No other industry, arguably, has had such a dramatic technological change in such a short amount of time. Though war is never seen in a positive light, it should be noted that one positive did come from wartime needs. This was the extremely fast development of technology, due in large part to the increasing demands of war. Without the demands of war, it is unlikely that such fast paced change would have happened, and in fact More planes were produced in World War 1 then in the prior 40 years. A review of the aircraft listed in this book shows the diversity and uniqueness of each design. Further research will show that each new design was quickly adapted and used by another county. The design technology was either stolen, given to the other country, or in the case of the German aircraft just after World War II - a spoil of war. Ironically, a few unique technological advances led to the obsolescence of nearly all prior aircraft regardless of geography â&#x20AC;&#x201C; one example was the jet engine.