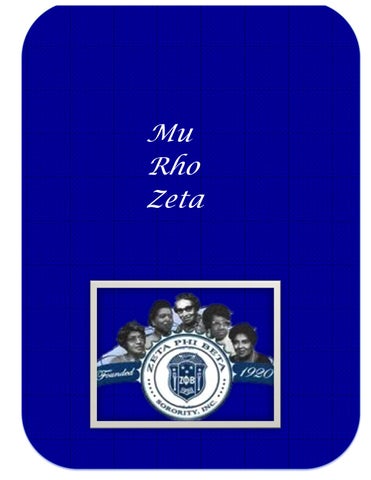 Zeta Phi Beta Sorority, Incorporated was founded January 16, 1920 on the campus of Howard University in Washington, DC by five coeds. These women dared to depart from the traditional coalitions for Black women and sought to establish a new organization predicated on the precepts of scholarship, service, sisterhood, and Finer Womanhood. The trail blazed by the Founders has been traversed by thousands of women dedicated to the emulations of the objectives and ideals of the Sorority. The Sorority was the first Greek-letter organization to charter a chapter in Africa; to form adult and youth auxiliary groups – the Amicae, Archonettes, Amicettes, and Pearlettes; and to be constitutionally bound to a brother group, Phi Beta Sigma Fraternity, Incorporated. Zeta’s national and local programs include the endowment of its National Educational Foundation; community outreach services; and support of multiple affiliate organizations. Zeta chapters and auxiliary groups have given countless hours of voluntary service to educate the public, assist youth, provide scholarships, support organized charities, and promote legislation for social and civic change. A non-profit organization, Zeta Phi Beta is incorporated in Washington, DC and the state of Illinois. The Sorority is supported by the dues and gifts of its members. Currently over 125,000 members in 800 Chapters Worldwide. IN THIS ISSUE … 1

Mu Rho Zeta was chartered February 6, 1984 with fourteen women linked by a common goal to reinstate Zeta Phi Beta’s presence in the Akron area, previously functioning as Epsilon Upsilon Zeta chartered in the early 1960’s. Soror Ruth Travis, Beatrice Neely, Anne Elam, and Annie Bowman were among the original charter members. Sorors Essie Henderson, Barbara Whaley and Virginia Jeffries were made in the summer of 1965. The chapter was actively functioning thru the early 1970’s. In January of 1983, the reactivation of the chapter began. Those that participated in the reactivation of Epsilon Upsilon Zeta were Sorors Ruth A. Travis, Ellen O. Goggins, Mary J. Parnell, Debra J Stroud, Anita Dowdell, Dianna Butler, Mel Causey, Jean King, Thelma Boyd, Linda Broaddus Woodson, Gayle Ward and Antoinette Bell. Epsilon Upsilon Zeta was notified by Nationals that the chapter name would have to be changed, because another chapter was operating with that name. Soror Evelyn Robinson was the State Director in August 1984. The Chapter had participated in a wide range of activities, dating back to September 23, 1983, first UNCF Fund Nite. Christmas Caroling at Dee-Maret Senior Citizens Home. Reinstatement Reception held at Soror Jean King’s home May 6, 1984. Chapter formed this year the Stork’s Nest Committee to work in conjunction with the Akron Teenage Parents Center. In July 1984, chapter held a Baby Shower at the Teenage Parents Center, 13 girls were in attendance. Donations were received from St. Thomas Hospital, Click’s, Aunt Bev’s Tots & Toddlers. During that same year, the chapter also volunteered for the Jesse Jackson Presidential campaign, joined the NAACP, supported the NAACP benefit concert, West Akron Parade, Arlington Church of God, Mt. Zion Baptist Church, Black Applause with either ads/patrons or donations and attended the Delta Sigma Theta New members reception.

The chapter remained active until the late 1980’s.

Soror Dr. Ellen Goggins spearheaded the efforts to re-charter Mu Rho Zeta Chapter. Soror Ruth Travis, Barbara Whaley, M. Quinita Sewell, Cheryl Hooks and Debra Shuler were active in this effort. The chapter was officially reactivated in 1991. Meetings nd were held 2 Sunday of the month for many years, either at the library of a Soror’s home.

Jointly conducting voter registration at the 3-day Lane Field Festival with our Sigma brother and volunteered for the YEPAW program.

Traditionally, throughout the years, there was not a meeting held in the month of December. The chapter used that day to have a Christmas Caroling program at AHOPES nursing facility; and ended the day with a covered dish holiday dinner at Soror Travis’.

The chapter was involved in jointly hosting (with the Sigmas) a mentoring program at Butchel High School with 2.3 or lower GPA and awarded scholarships to those who had the most improved overall GPA and was planning to attend college.

The first African Ball was held in 1992. It was publicized in the Akron Beacon Journal, Reporter, and was very well attended. Our Grand Basileus Soror Jylla Foster Moore attended the Ball. The African Ball continues today as “The Heritage Ball” with the revised theme that salutes the “Council of Elders”, paying homage to those who blazed the paths to make our further brighter. In recent years we have began hosting “The Breakfast with the Stars”, which showcases the talents of area youth and presenting scholarships to those who have excelled academically.

In 1997, the chapter opened a local “Stork’s Nest” at rd St. Paul A.M.E. church, Akron Ohio held on the 3 Saturday of every month except for July and December. Soror K. Rene Williams and Cheryl Hooks have actively coordinated the program from its conception now in its current location South Arlington United Methodist Church with the assistance in the coordinating from Tonya Okolo and Gina Shaw in select years.

In 2001, the chapter held a train trip fundraiser to Las Vegas, which was spearheaded by Soror Ruth Travis, generating nearly $10,000 in profits.

Building on its legacy of community service, Zeta Phi Beta has adopted a national service program that is viable for the 21st Century, and more importantly, meets the critical societal needs that we currently face. The program is Z-HOPE: Zetas Helping Other People Excel (through Mind, Body, and Spirit). Z-HOPE is a holistic, multidimensional outreach program. One of the primary goals of Z-HOPE is to enhance, cultivate, and empower participants to develop health-promoting lifestyle choices in all stages of their life.

The Storkâ&#x20AC;&#x2122;s Nest Storkâ&#x20AC;&#x2122;s Nest seeks to increase the number of healthy births in communities by increasing the number of lowerincome pregnant women receiving adequate medical care and social services during their pregnancies. It does this by providing: incentives (clothing and nursery items) for expectant mothers who attend prenatal care visits early and regularly, which improves the chances of having a healthy birth. Also, by providing opportunities for pregnant women and their partners to participate in educational programs so they can make informed decisions related to prenatal health, nutrition, and parenting. And finally, by providing information and referrals to community resources, which meet needs, concerning the physical and emotional well being of mothers and their families. rd 3 Saturday of Each Month (Jan-Jun, Aug-Nov) from 11am-12pm at South Arlington United Methodist Church, 790 S. Arlington St Akron, OH

Mu Rho Zeta Chapter was the 1st recipient Soror Janice G. Kissner Award for raising the most money for the March for Babies 2011 for the State of Ohio. Contributing over $1,700 for the foundation!

Ruth Mae (Anderson) Travis: A True Zeta Torchbearer Elegance Attended Wilberforce University in Wilberforce Ohio in 1933, Entered Zetadom in 1935 graduated in 1937 with a Bachelors of Science Degree in Health and Physical Education and a minor in Biological Science. Met past International Grand Basileus Violette N. Anderson Esq. while at Wilberforce University. Was an Active member of Mu Rho Zeta Graduate Chapter until triumphantly joining the Omega Chapter March 26, 2013. Leave behind a rich legacy of serving the Akron Community and Finer Womanhood excellence and grace. Participated in re-activating the Graduate Chapter in Akron. Was instrumental in the largest fundraising event in the Chapter history, raising over $10,000 in the train trip to Las Vegas, NV.

Christmas with the Zetas & Friends 2012

Signature Programs “The Stork’s Nest” is a community-based, prenatal health promotion program for low-income pregnant woman. “March for Babies” National Partner of Zeta Phi Beta Sorority, Inc. to raise funds and awareness to prevent premature births, birth defects and infant mortality. “Heritage Ball Award” recognition banquet of outstanding individuals/leaders who have served the Akron/Canton area with the time, enriching the lives of others in politics, education, business and community interaction. “Breakfast With the Stars” recognition of youth talent in Akron! Their accomplishments, both in performance, and scholastics.

Mu Rho Zeta Goes to Great Lakes Regionals in In dianapolis, IN

Masters of Art in Composition

Bachelors of Art in English & Writing

Building on The Principles of Zeta, While Blazing New Paths 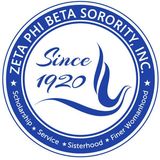