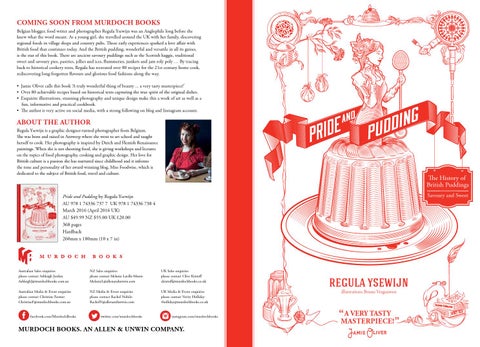 Belgian blogger, food writer and photographer Regula Ysewijn was an Anglophile long before she knew what the word meant. As a young girl, she travelled around the UK with her family, discovering regional foods in village shops and country pubs. Those early experiences sparked a love affair with British food that continues today. And the British pudding, wonderful and versatile in all its guises, is the star of this book. There are ancient savoury puddings such as the Scottish haggis, traditional sweet and savoury pies, pastries, jellies and ices, flummeries, junkets and jam roly poly … By tracing back to historical cookery texts, Regula has recreated over 80 recipes for the 21st century home cook, rediscovering long-forgotten flavours and glorious food fashions along the way. illustrations Bruno Vergauwen

The History of British Puddings

Regula Ysewijn is a graphic designer-turned-photographer from Belgium. She was born and raised in Antwerp where she went to art school and taught herself to cook. Her photography is inspired by Dutch and Flemish Renaissance paintings. When she is not shooting food, she is giving workshops and lectures on the topics of food photography, cooking and graphic design. Her love for British culture is a passion she has nurtured since childhood and it informs the tone and personality of her award-winning blog, Miss Foodwise, which is dedicated to the subject of British food, travel and culture.

The History of British Puddings Savoury and Sweet

• J amie Oliver calls this book ‘A truly wonderful thing of beauty ... a very tasty masterpiece!’ • Over 80 achievable recipes based on historical texts capturing the true spirit of the original dishes. • Exquisite illustrations, stunning photography and unique design make this a work of art as well as a fun, informative and practical cookbook. • The author is very active on social media, with a strong following on blog and Instagram account.

The History of British Puddings Savoury and Sweet

love puddings. Sweet, savoury, boiled, steamed, baked and fried: I will eat all of them. But when I say pudding, I mean PUDDING. I don’t mean sweets, or desserts. In modern Britain, pudding has come to mean anything sweet at the end of a meal. Pudding is shorthand for many things I don’t like: overly sweet cakes, Americanised brownies, fruit in anything but its most raw form.... When I want a pudding, I want something solid, something fuelling, something so quintessentially British that it reinforces who I am at a very basic level; and yet it’s something that is so hard to define that in many ways those feelings are the definition. Pudding’s had a bad press. Someone described as a pudding is overweight, rotund. If a substance is puddinglike, it’s solid, unyielding, stodgy. But there’s something glorious about those very aspects of pudding. Pudding fills the stomach. Pudding salves the soul. Pudding’s very solidity grounds us, and its traditional round or oval shape is unflinchingly simple. Pudding cuts right to the heart of Britishness. In the eighteenth century, when British cuisine was growing up and developing an identity, pudding was central to British gastronomy. It represented British simplicity, adaptability and perhaps a little bit of thuggishness in the face of the prevailing fashion for French food, criticised as fanciful, wasteful and full of deception. It appeared in satires as a symbol of the Empire, and illustrations as a symbol of family. The Victorians had puddings for every occasion, recognising that no matter what class you were, and what position you occupied, with a pudding on the table you were all as one. The decline of the pudding, in some ways, echoes a confusion over what nationality and national identity means in the modern world, and whether they are even useful ideas at all.

Prejudiced I may be, but I’m pretty proud of my country’s pudding heritage. You’ll see as you peruse this book, there’s a lot more to pudding than meets the eye. For me, seeing pudding through the eyes of someone who has come to love it, despite the breadth of the North Sea between herself and Pudding Central, is a glorious way to appreciate it even more. Delve in (preferably with a spoon), and enjoy. Here’s to pudding! Dr Annie Gray, food historian

Of course, we can read too much into it. But I do think that pudding and Britishness are intrinsically linked, and that were we to talk about ‘getting a British’, in the same way we in Britain talk about ‘getting an Indian’ or ‘getting a Chinese’ [meal], then what we’d be getting would be a pudding. And I’d be okay with that.

So what’s a pudding ? Let us first take a look at what we categorise as puddings today. Although pudding has become synonymous with dessert in Britain, not all puddings are desserts, while all desserts are puddings in the modern sense of the word.

Boiled and steamed puddings Early puddings are, as I explained, sausage-type dishes, which were usually boiled, then often smoked, or roasted. They were either made with meat, blood or entirely from rice, spelt or other grains stuffed into some kind of intestine or cloth bag. These puddings were always flavoured in one way or another, either using herbs or spices. Later candied fruits, fortified wines and liqueurs were added and the puddings nearly all lost their meat content. Steaming them in a basin or mould became the favoured method over boiling, when the technique was developed. Today steamed puddings are usually made of a sponge cake batter, or a rich fruitcake batter and are made either in large pudding moulds, or small individual ones. Savoury versions still exist under the name haggis, blood pudding and white pudding. Dumplings are also puddings.

Baked puddings Baked puddings are those in which the pudding mixture is placed in either a bowl or tray, which is sometimes prepared with a layer of pastry, making it more a tart or a pie. Today most tarts and pies are considered ‘pudding’ as they fit into the dessert category. They are of course all baked.

Milk puddings The sweet and delicately flavoured puddings made with animal milk, almond or oat milk include creams, custards and ice creams.

Jellies These are sweet puddings set with either vegetable or grain starches, or animal-derived gelatine. They are often boldly coloured and shaped in a mould for dramatic effect. They can encase fruit and in medieval times they often encased meat or fish, much like aspic, although they are no longer known as jellies.

These are made by making a light pancake-type batter which is then baked or fried in butter or fat. These can be Yorkshire puddings, but also fritters.

We often assume moulds were only used for jelly making, but actually those same moulds, whether they were copper, tin or ceramic, would have been used for moulded cakes, steamed puddings, milk puddings and ice creams and also fruit cheeses or potted meats and terrines. Teacups were even used as moulds, as instructed by Mary Eales, confectioner to Queen Anne, in her Receipts, published in 1718. Saucers were also used to make ‘a pudding stued between two dishes’ as noted by John Murrell, in A Newe Booke of Cookerie in 1615. Moulds in carved wood, delicate salt-glazed stoneware and a more robust creamware pottery were produced from the early eighteenth century. Some were made into elaborate shapes, such as castles and temples. One of these producers was Wedgwood, who produced a Solomon’s Temple mould for flummery dishes and many other shapes and forms. Small fish were made and Mrs Raffald, in The Experienced English Housekeeper (1769), used them to create a ‘fish pond’, fish made of flummery that were then gilded and placed on a pool of clear jelly as if they were swimming. This shows the great fantasy style in which dishes were presented to guests. introduction |

Catalogues with illustrations of all the different types of moulds were being produced by large manufacturers such as Benham &amp; Froud and, in smaller scale, Agnes Marshall. They were expensive and the copper ones needed regular retinning on the inside. Some moulds were very elaborately designed and sometimes even had multiple parts to create striking multicoloured jellies with. These were called ‘Macedoine Moulds’ and were unique to Britain. They were admired in other countries by important chefs. The jelly made in them could have different layers of colours and several kinds of fresh fruit added. In the twentieth century, moulds were still expensive but the earthenware ones became more affordable for middle class households. In 1911 Grimwades pottery won a gold medal for its ‘Quick Cooker’, a lidded porcelain pudding steamer with the instructions for use printed all over it. They also had a ‘Blanc-Mange Jelly Mould’ like this. Brown &amp; Polson also produced a pudding mould printed with the recipe of their ‘Corn Flour Blanc-Mange’. This shows the need for guidance and a more simplified way of cooking without many domestic servants. Twenty-first century moulds are made for nostalgic reasons and usually in aluminium to use for moulded cakes. It is very rare now that a blancmange or elaborate home made jelly would feature on a dinner table. Packs of powdered jelly are used for trifle and for making small jellies and the moulds are usually from pliable silicone. But there is a revival coming: two British guys have started a company creating bespoke jelly moulds and jellies for special occasions and movies. It is still very niche but it shows the longing for a kind of splendour and theatre on the feast table that we have lost over the years. It is only a matter of time before it becomes a trend again, as so many retro things have become trends in the past decades.

Sometimes multiple uses are possible for one kitchen object and this is also true with regard to the different pudding or jelly moulds out there.

ogs pudding is connected to the West Country today, but in the olden days it used to be made nationally. There are versions using a pig’s or lamb’s ‘pluck’ – which is heart, lungs and liver – instead of just pig’s liver, giving it the name Devonshire or West Country Haggis. However, I have not come across a mention of a Devonshire haggis or a West Country haggis in any of my ancient cookery books, so I believe that is a modern tale. Hogs pudding was traditionally cut into slices and fried, and the slices were then used to decorate other plates of meat. It was eaten as a side dish, with something else. This is a nice salty pudding to have with scallops or lobster, and it is also very good for breakfast with an egg or two.

Another Sort of Hogs Puddings To half a pound of grated bread, put half a pound of hogs liver boil’d, cold, and grated, a pound and half of suet finely shred, a handful of salt, a handful of sweet herbs, chopt small, some spice; mix all these together, with six eggs well beaten, and a little thick cream; fill your guts and boil them; when cold, cut them in round slices an inch thick; fry them in butter, and garnish your dish of fowls, hafh, or fricassee The Compleat Housewife, Eliza Smith, 1727 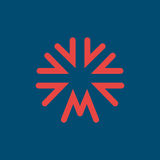