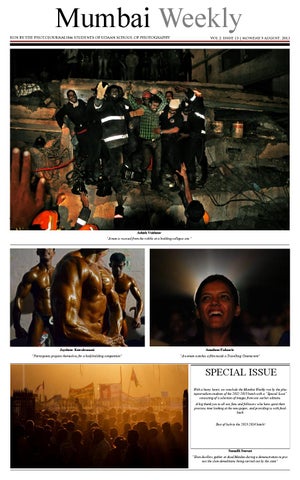 Ashish Vaishnav “A man is rescued from the rubble at a building collapse site.”

“Participants prepare themselves for a bodybuilding competition”

“A woman watches a film inside a Travelling Cinema tent”

SPECIAL ISSUE With a heavy heart, we conclude the Mumbai Weekly run by the photojournalism students of the 2012-2013 batch with a “Special Issue” consisting of a selection of images from our earlier editions. A big thank you to all our fans and followers who have spent their precious time looking at the newspaper, and providing us with feedback. Best of luck to the 2013-2014 batch!

Ashish Vaishnav “A child is rescued from a building collapse site”

Ashish Vaishnav “People pray at the site of the building collapse”

Biplov Bhuyan “A women reacts to the slum demolition”

Kunal Khullar „Family members of Kamal Siddique Shaikh react as his corpse is moved into the ambulance after being pulled out of the debris.”

Jayshree Kewalramani “Employees at a bar stand around customers”

Anushree Fadnavis “Yana ,a Eunuch, applies make-up on a street”

Sumedh Sawant “A man naps inside a taxi”

Ashish Vaishnav “A woman looks outside a train window”

Jayashree Kewalramani “A laborer works at a construction site”

Ashish Vaishnav “A scrap dealer sits outside his shop According to news reports, India‟s e-waste market will account to USD 100 million in the year 2013. “

Ashish Vaishnav “People walk in front of the Gateway of India during St. Patrick‟s Day”

Francis Mascarenhas “Folk artist Ankit Chadha regales the audience with his performance of Dastangoi, an Urdu form of storytelling, at an amphitheater”

Francis Mascarenhas “Zafrin Shah performs a can can, as photographer Wasuwat Torkaew looks on during the Xtreme Invasion event”

Prashant Nair “A swimmer performs a butterfly stroke during a tournament”

On my first visit to Udaan, a faculty member told me to join the course only if I felt passionate about it and I knew what I had to do. Since then, time flew by so quickly and before I knew it, a year has passed by. Despite all the rigorous rules that were in place, we enjoyed this worthwhile journey. It has changed me as a person, my outlook towards life and made me more professional.

After joining Udaan my first two months were like any other college where I was trying to learn a new concept and this time it was called 'photojournalism'. Within a few months, my whole perspective of seeing a picture as a photographer changed and I learned how to take photography to a different level. I would say from working in a news room to covering everyday events to making personal edits and submitting usable pictures, which finally get published publish is not a layman's work. One needs sheer dedication, hard work and complete focus on the standard of pictures required to suit a particular story. Gradually i started to learn about value of time, commitment, respect, working in a team and most importantly handling pressure at work .

The long discussions about photojournalism, our classes and the Mumbai Weekly newsroom where I am writing this editorial, I am going to miss. The roles that we played as editor-in-chief, photo editor, chief photographer or desker have helped us understand how a newsroom works. They have taught us how to work as a team, to handle crisis and also face the music when you make mistakes. They have made us aware of all the responsibilities that we will soon be facing in real life situations and have helped us mature.

It was just landscape, silhouette, flowers, and some mundane daily life pictures on the street i used to capture before. I didn‟t even know the proper use of the buttons on the camera, and I used to somehow manage to correctly expose the photo by looking at the camera screen. Then I enrolled at Udaan. The first day I learned how to expose the picture properly, and I realized why my pictures sometimes looked too black and sometimes too white. That day onwards I explored more and more about photography every day. Then began the 'photojournalism' module, about which I was very excited. We were told to form a team to work for Photography once upon a time was just a hobby for me and Mumbai Weekly, which I realized is a newspaper now I can actually connect to the real world with real pic- where photographs rule the entire page. On the field tures . Thanks to Udaan for this worthwhile journey of with other photojournalists, I learned many things Mumbai Weekly. like patience & perseverance which are most important for photojournalism.

Of course this is not a goodbye but a new start, where we have to prove ourselves in the real world. As one of the members of the faculty put it, “Here on, no mercy!”, to which I have to say, "Bring it on!”

Working in a newspaper has always been a mesmerizing feeling for me and having the thought of your pictures being published is just amazing. Thanks to Mumbai Weekly, I got the opportunity to see and feel how a newspaper organisation works. It was a life changing experience for me as it brought me close to this over-the-top hard working person inside me. Apart from gaining experience and becoming wiser, I went through a bundle of emotions which in itself was a lesson for me. From sitting for long hours waiting for the right moment to get a picture, to sitting on the laptop all day and night making pages, my level of patience and perseverance went to a whole new level. I also learned how important it is to work as a team and my colleagues helped in making this lesson easy for me. With this volume of the newspaper coming to a close I am somewhere sad leaving the newsroom, but I am also happy that I gained so much out of this experience. A special thanks to all my colleagues who have always been the best support and also to the faculty members for being the best mentors at every step. Jayshree Kewalramani

Ashish Vaishnav After learning the basics of photography in the first half, the second half of the year became more exciting as we started work on our online newspaper. An editorial team was formed on the lines of the working of an actual newspaper. I was a member of the photographer‟s team, who would be on field covering news around the city, which in itself was exciting because we would be competing with professional photojournalists. Initially our news source was only newspapers, but with time we started building contacts in the press, who became our sources of news and events happening around the city. Initially, I was a bit hesitant in covering sports events but slowly that uncertainty vanished and today I love covering sports as it‟s a challenge in itself. It requires immense concentration and patience which can bring out the best or the worst in you as a photographer. I thoroughly enjoyed the entire process of Mumbai Weekly being on both sides of a coin. It has definitely empowered me to understand the profession better.

Mumbai Weekly‟s Debadatta Mallick on an assignment at Azaad Maidan.

Mithila Joshi One year, thirteen issues, a hundred and four pages, and countless lessons- Mumbai Weekly has been an experience like no other. Spending five issues on the editorial team came with both sudden and slow realizations. I learned to accept the fact that sometimes differences are unavoidable, no matter how much you resent confrontation and love peace. I learned that no matter how hard you try, you can‟t please everyone. And that it‟s important to get past all of that and remain professional. The definition of the word „professional‟ has expanded and evolved into a way of life for me. I haven‟t perfected it yet, but I‟m working on it.

The long and winding road has finally come to an end. My experience at Mumbai Weekly has been fantastic, thanks to a team filled with enthusiastic and fun colleagues and amazing professors who disciplined and motivated us to no end. I‟ve experienced a rollercoaster of emotions, ranging from total depression when a shot is missed, to complete ecstasy when that fleeting moment is captured. There have been many highlights during my time at Mumbai Weekly, but my most memorable experience was battling through a swarm of photojournalists, videographers and police to get a very standard picture of the controversial Gurunath Meiyappan during the match fixing scandal. It was a total adrenaline rush, a very satisfying feeling for me.

The past year has been life changing! I had never imagined that my life would be this way a few months back. Everyday has been so different since I started working for Mumbai Weekly. On my first assignment itself, I got arrested and got hit in a lathi charge. What an experience that was! I had never thought I'd take pictures of both celebrities and dead bodies. My life has completely changed and I have learned a lot. I'm glad that I worked on Mumbai

I met a friend one Sunday and we were having lunch when he blurted out the words that I hadn‟t used in a very long time, “Oh, its Monday tomorrow!”, followed by a sigh of frustration. That made me realize how fortunate I was to be doing something I loved and enjoyed. The entire experience of working for Mumbai Weekly has also made me confident of walking into any other newspaper or agency and delivering good pictures.

Regardless of what role you play in Mumbai Weekly, the experience does teach you a thing or two about the real world. It left someone like me who was fresh out of college then shaken up and overwhelmed, but today I am glad I worked shoulder to shoulder with teammates as old as 35 and as young as 18. With Mumbai Weekly, we were put on a level playing field, and it was left to us to make or take our own opportunities. Looking back to a year ago, I see none of the ferocity and hunger that I am glad Mumbai Weekly and Udaan sparked off in me today.

Working for a newspaper, one where you have to shoot pictures, edit and caption them and also involve yourself in the layout of a newspaper has been a rare and challenging experience. Usually, one hears of photographers fighting with the design team over bad crops but Mumbai Weekly allowed me to see both sides of the coin. How a photograph gets published is as important as the actual process of taking the picture. Sometimes you get attached to a picture because of the effort you have taken but the editors trash it because it simply does not resonate with them. All of us have seen pictures dear to us not make it to the page. And sometimes we have witnessed seemingly ordinary pictures take on a whole new meaning when an experienced eye retrieved them. For me the biggest lesson has been to look at images afresh and not let received notions of 'good taste' influence one's taste.

Prashant Nair Mumbai weekly was a very pleasant experience for me, a very new and exciting experience, in fact. Though I could not be fully devoted to it due to personal and family issues, I learned a lot. What I knew about photojournalism and what I know now is totally different and I can say I now know better. Working for Mumbai Weekly was challenging, as you have to go out to shoot pictures and make sure they are good enough to finally go into the paper. I learned a lot about discipline and how to work professionally with your colleagues and under deadlines. It prepared me for what will be in store when we finally go out there in the field and work professionally as photojournalists. All in 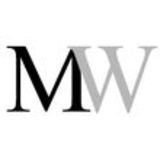