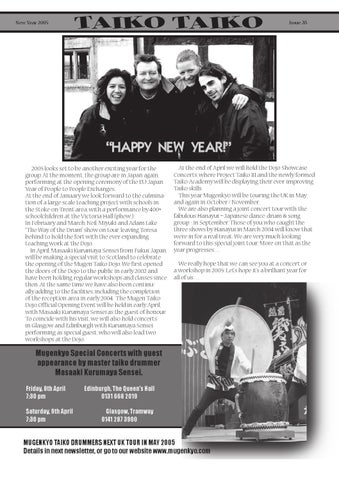 “HAPPY NEW YEAR!” 2005 looks set to be another exciting year for the group. At the moment, the group are in Japan again, performing at the opening ceremony of the EU-Japan Year of People to People Exchanges. At the end of January we look forward to the culmination of a large-scale teaching project with schools in the Stoke-on-Trent area, with a performance by 400+ schoolchildren at the Victoria Hall (phew!). In February and March, Neil, Miyuki and Adam take “The Way of the Drum” show on tour, leaving Teresa behind to hold the fort with the ever expanding teaching work at the Dojo. In April, Masaaki Kurumaya Sensei from Fukui, Japan, will be making a special visit to Scotland to celebrate the opening of the Mugen Taiko Dojo. We ﬁrst opened the doors of the Dojo to the public in early 2002 and have been holding regular workshops and classes since then. At the same time we have also been continually adding to the facilities, including the completion of the reception area in early 2004. The Mugen Taiko Dojo Ofﬁcial Opening Event will be held in early April, with Masaaki Kurumaya Sensei as the guest of honour. To coincide with his visit, we will also hold concerts in Glasgow and Edinburgh with Kurumaya Sensei performing as special guest, who will also lead two workshops at the Dojo.

At the end of April we will hold the Dojo Showcase Concerts, where Project Taiko III and the newly formed Taiko Academy will be displaying their ever-improving Taiko skills. This year Mugenkyo will be touring the UK in May and again in October / November. We are also planning a joint concert tour with the fabulous Hanayui – Japanese dance, drum & song group - in September. Those of you who caught the three shows by Hanayui in March 2004 will know that we’re in for a real treat. We are very much looking forward to this special joint tour. More on that as the year progresses… We really hope that we can see you at a concert or a workshop in 2005! Let’s hope it’s a brilliant year for all of us…

MUGENKYO TAIKO DRUMMERS NEXT UK TOUR IN MAY 2005 Details in next newsletter, or go to our website www.mugenkyo.com

TAIKO TAIKO The quarterly newsletter of Mugenkyo and the Mugen Taiko Dojo, publishing news on concerts, Taiko Dojo activities, the art form of Taiko, and Taiko events in the UK.

The MUGEN TAIKO DOJO is the ﬁrst purpose-built Taiko Centre in the UK. Located in rural Scotland, it is a place where people gather from all over Britain and Europe to learn about the art form of Taiko through residential workshops and regular classes. It is also the permanent base and training space for Mugenkyo. The Dojo’s extensive outreach programme brings Taiko to schools and communities throughout the UK. www.taikodojo.com

Joji Hirota, the well-respected London-based Japanese percussionist has recently released a new CD: “Japanese Taiko”by Joji Hirota and the Taiko Drummers. The CD also features two ex-members of Mugenkyo: Mark Alcock and Liz Walters, who continue their Taiko playing both with Joji Hirota and also with their own London-based groups. Further information on Joji Hirota can be found on: www.jojihirota.com Joji Hirota’s CD can be bought from the “Knock on Wood” website: www.knockonwood.co.uk or tel: 01423 712 712 Knock on Wood also stock various other taiko CDs

A warm welcome to the newest member of the team: Anna Birkett, whose main role is as the administrator in the ofﬁce, but who can also occasionally be seen on stage as a player in the Taiko Academy. She’s the friendly voice on the telephone at the Mugenkyo ofﬁce, and our reliable person behind - the - scenes

THE REAL FACE under the mask of Hilde McKenna who joined us on tour in 2004. Thank you Hilde!!

10th Anniversary Concert in Takefu, Japan In November, Mugenkyo were invited to Japan to perform their 10th anniversary concert in Takefu City in Fukui Prefecture. It’s amazing to think that it’s been 10 years since Neil & Miyuki formed the group in 1994, and 12 years since we ﬁrst moved to Fukui on the west coast of Japan. It was here that a chance encounter with master drummer Masaaki Kurumaya Sensei led us on a path that would change our lives. Obtaining a cultural visa to stay in Japan to study Taiko, Neil became Kurumaya Sensei’s apprentice, following him to every class and group he taught, practicing on a cardboard drum until the rhythms were good enough to play on a real taiko. Miyuki began attending lessons as a translator, then was gradually drawn into the world of Taiko drumming. After two wonderful years in Fukui, we returned to Britain to form Mugenkyo. The special concert in Takefu was a great success – a sell-out show with 600 people in attendance, and our friends who have supported us over the years. It was also Mugenkyo’s very ﬁrst “solo concert” in Japan. It was especially great to be able to thank those people

who had helped us, and also to show them how far we’ve come in these 10 years. It touched us deeply to see so many familiar faces in the audience; there were many in tears at this very emotional event.

Performing with Kurumaya Sensei was a real pleasure, and also a challenge as the great thing about Fukui-style is the improvised nature of the pieces, and as usual we were kept on our toes, as we just didn’t know what he was going to do next! The energy created by that tension is really what gives Fukui-style its distinctive character, and there certainly was a lot of high tension in the air that night. You could almost hear the audience collectively holding their breath, and then letting out a great sigh at the end before exploding into applause.It

was an amazing once-in-a-lifetime event. In the lead-up to the concert, in addition to all of the organising and planning, we also took part in “koryukai” cultural exchanges, at a community centre, a primary school and a secondary school, taking the opportunity to explain about taiko in Britain and our activities here. A very special thank you to Fumi Nojiri from the Takefu International Association for making it all happen and for your endless energy, to Yagi-san and crew on lights, Martin Miller on sound, to Kicho-no-kai and the Kurumaya Taiko Dojo for allowing us to use their precious drums, and to all the volunteers who worked so hard both in the lead up to the concert and on the day - we couldn’t have done it without you!

NOTICE The Way of the Drum

For those of you who can’t wait for the next Mugenkyo tour,this special show presented by the Taiko Dojo is designed to introduce the traditions and history of taiko through traditional pieces, audience interaction and the usual thundering rhythms, energy and excitement you’ve come to expect from us! Don’t miss this unique opportunity to see taiko “up close & personal” at a venue near you!

This workshop is only open to people with experience in playing or performing taiko. Masaaki Kurumaya Sensei will be giving advice based on his 35 years of experience playing taiko. He is a master at making a powerful sound out of a Taiko drum, and at directing KI energy in his playing. The workshop content will be Fukui-style “mitsu-uchi”. This workshop is to be held on the Sunday after the concerts in Edinburgh & Glasgow, so we highly recommend coming to one or both concerts to experience Masaaki Kurumaya Sensei performing.

Introductory Weekend Workshop Date: 26 + 27 March 2005 Price: £130 non-residential (includes lunch) Residential packages available on request What better way to spend Easter weekend than learning a new skill, making new friends, and playing these beautiful instruments. A booster shot of good energy for the new year, (and be the ﬁrst in line for the next guest teacher workshops)! Contact us on: 01357 522 008 or mail@taikodojo.com 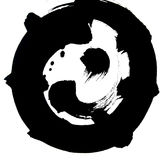