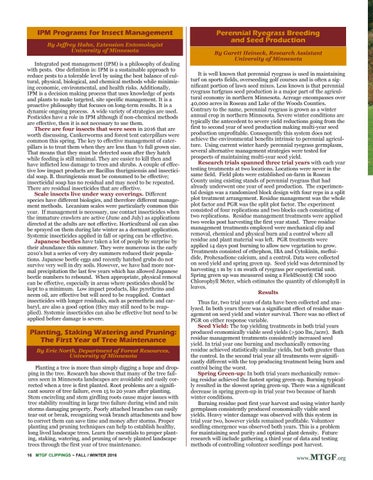 IPM Programs for Insect Management By Jeffrey Hahn, Extension Entomologist University of Minnesota Integrated pest management (IPM) is a philosophy of dealing with pests. One definition is: IPM is a sustainable approach to reduce pests to a tolerable level by using the best balance of cultural, physical, biological, and chemical methods while minimizing economic, environmental, and health risks. Additionally, IPM is a decision making process that uses knowledge of pests and plants to make targeted, site specific management. It is a proactive philosophy that focuses on long-term results. It is a dynamic ongoing process. A wide variety of strategies are used. Pesticides have a role in IPM although if non-chemical methods are effective, then it is not necessary to use them. There are four insects that were seen in 2016 that are worth discussing. Cankerworms and forest tent caterpillars were common this spring. The key to effective management of caterpillars is to treat them when they are less than Â˝ full grown size. That means that they must be detected soon after they hatch while feeding is still minimal. They are easier to kill then and have inflicted less damage to trees and shrubs. A couple of effective low impact products are Bacillus thurigniensis and insecticidal soap. B. thuringiensis must be consumed to be effective; insecticidal soap has no residual and may need to be repeated. There are residual insecticides that are effective. Scale insects live under waxy coverings. Different species have different biologies, and therefore different management methods. Lecanium scales were particularly common this year. If management is necessary, use contact insecticides when the immature crawlers are active (June and July) as applications directed at the adults are not effective. Horticultural oil can also be sprayed on them during late winter as a dormant application. Systemic insecticides applied in fall or spring can be effective. Japanese beetles have taken a lot of people by surprise by their abundance this summer. They were numerous in the early 2010â&amp;#x20AC;&amp;#x2122;s but a series of very dry summers reduced their populations. Japanese beetle eggs and recently hatched grubs do not survive very well in dry soils. However, we have had more normal precipitation the last few years which has allowed Japanese beetle numbers to rebound. When appropriate, physical removal can be effective, especially in areas where pesticides should be kept to a minimum. Low impact products, like pyrethrins and neem oil, are effective but will need to be reapplied. Contact insecticides with longer residuals, such as permethrin and carbaryl, are also a good option (they may still need to be reapplied). Systemic insecticides can also be effective but need to be applied before damage is severe.

Planting, Staking Watering and Pruning: The First Year of Tree Maintenance By Eric North, Department of Forest Resources, University of Minnesota Planting a tree is more than simply digging a hope and dropping in the tree. Research has shown that many of the tree failures seen in Minnesota landscapes are avoidable and easily corrected when a tree is first planted. Root problems are a significant source of tree failure, even 15 to 20 years after planting. Stem encircling and stem girdling roots cause major issues with tree stability resulting in large tree failure during wind and rain storms damaging property. Poorly attached branches can easily tear out or break, recognizing weak branch attachments and how to correct them can save time and money after storms. Proper planting and pruning techniques can help to establish healthy, long lived landscape trees. Learn the essentials to proper planting, staking, watering, and pruning of newly planted landscape trees through the first year of tree maintenance. 16 MTGF CLIPPINGS ~ FALL / WINTER 2016

Perennial Ryegrass Breeding and Seed Production By Garett Heineck, Research Assistant University of Minnesota It is well known that perennial ryegrass is used in maintaining turf on sports fields, overseeding golf courses and is often a significant portion of lawn seed mixes. Less known is that perennial ryegrass turfgrass seed production is a major part of the agricultural economy in northern Minnesota. Acreage encompasses over 40,000 acres in Roseau and Lake of the Woods Counties. Contrary to the name, perennial ryegrass is grown as a winter annual crop in northern Minnesota. Severe winter conditions are typically the antecedent to severe yield reductions going from the first to second year of seed production making multi-year seed production unprofitable. Consequently this system does not achieve the environmental benefits intrinsic to perennial agriculture. Using current winter hardy perennial ryegrass germplasm, several alternative management strategies were tested for prospects of maintaining multi-year seed yield. Research trials spanned three trial years with each year testing treatments at two locations. Locations were never in the same field. Field plots were established on-farm in Roseau County using existing stands of perennial ryegrass that had already underwent one year of seed production. The experimental design was a randomized block design with four reps in a split plot treatment arrangement. Residue management was the whole plot factor and PGR was the split plot factor. The experiment consisted of four replications and two blocks each consisting of two replications. Residue management treatments were applied two weeks post harvesting the first year stand. Three residue management treatments employed were mechanical clip and removal, chemical and physical burn and a control where all residue and plant material was left. PGR treatments were applied 14 days post burning to allow new vegetation to grow. Treatments consisted of ethephon, IBA and Cytokinin, mefluidide, Prohexadione calcium, and a control. Data were collected on seed yield and spring green up. Seed yield was determined by harvesting 1 m by 1 m swath of ryegrass per experiential unit. Spring green up was measured using a FieldScoutÂŽ CM 1000 Chlorophyll Meter, which estimates the quantity of chlorophyll in leaves. Results Thus far, two trial years of data have been collected and analyzed. In both years there was a significant effect of residue management on seed yield and winter survival. There was no effect of PGR on either response variable. Seed Yield: The top yielding treatments in both trial years produced economically viable seed yields (&gt;500 lbs./acre). Both residue management treatments consistently increased seed yield. In trial year one burning and mechanically removing residue achieved statistically similar yields, but both greater than the control. In the second trial year all treatments were significantly different with the top producing treatment being burn and control being the worst. Spring Green-up: In both trial years mechanically removing residue achieved the fastest spring green-up. Burning typically resulted in the slowest spring green-up. There was a significant decrease in spring green-up in trial year two because of harsh winter conditions. Burning residue post first year harvest and using winter hardy germplasm consistently produced economically viable seed yields. Heavy winter damage was observed with this system in trial year two, however yields remained profitable. Volunteer seedling emergence was observed both years. This is a problem for maintaining seed purity and optimal plant density. Future research will include gathering a third year of data and testing methods of controlling volunteer seedlings post harvest. www.MTGF.org

A magazine from the Minnesota Turf and Grounds Foundation to promote the green industry in Minnesota through support of research, education and outreach at the University of Minnesota and elsewhere.