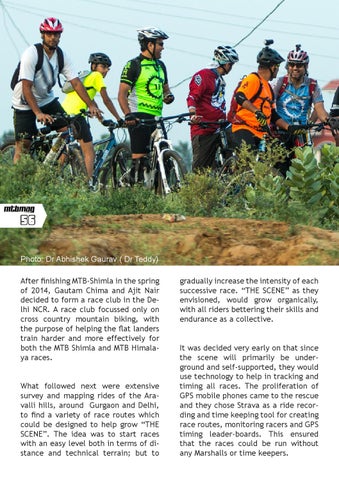 Photo: Dr Abhishek Gaurav ( Dr Teddy) After finishing MTB-Shimla in the spring of 2014, Gautam Chima and Ajit Nair decided to form a race club in the Delhi NCR. A race club focussed only on cross country mountain biking, with the purpose of helping the flat landers train harder and more effectively for both the MTB Shimla and MTB Himalaya races. What followed next were extensive survey and mapping rides of the Aravalli hills, around Gurgaon and Delhi, to find a variety of race routes which could be designed to help grow “THE SCENE”. The idea was to start races with an easy level both in terms of distance and technical terrain; but to

gradually increase the intensity of each successive race. “THE SCENE” as they envisioned, would grow organically, with all riders bettering their skills and endurance as a collective. It was decided very early on that since the scene will primarily be underground and self-supported, they would use technology to help in tracking and timing all races. The proliferation of GPS mobile phones came to the rescue and they chose Strava as a ride recording and time keeping tool for creating race routes, monitoring racers and GPS timing leader-boards. This ensured that the races could be run without any Marshalls or time keepers. 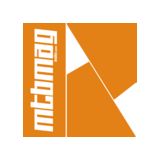 13 - Superstition?! Yes or no? We believe things happen for a reason. And a lot of things have happened in the last 2 months again. First, t...

13 - Superstition?! Yes or no? We believe things happen for a reason. And a lot of things have happened in the last 2 months again. First, t...