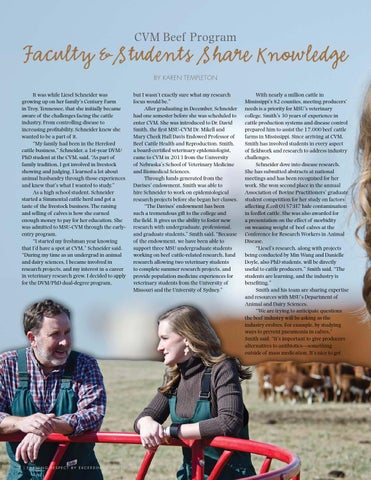 Faculty &amp; Students Share Knowledge By Karen TEmpleton It was while Liesel Schneider was growing up on her family’s Century Farm in Troy, Tennessee, that she initially became aware of the challenges facing the cattle industry. From controlling disease to increasing profitability, Schneider knew she wanted to be a part of it. “My family had been in the Hereford cattle business,” Schneider, a 1st-year DVM/ PhD student at the CVM, said. “As part of family tradition, I got involved in livestock showing and judging. I learned a lot about animal husbandry through those experiences and knew that’s what I wanted to study.” As a high school student, Schneider started a Simmental cattle herd and got a taste of the livestock business. The raising and selling of calves is how she earned enough money to pay for her education. She was admitted to MSU-CVM through the earlyentry program. “I started my freshman year knowing that I’d have a spot at CVM,” Schneider said. “During my time as an undergrad in animal and dairy sciences, I became involved in research projects, and my interest in a career in veterinary research grew. I decided to apply for the DVM/PhD dual-degree program,

but I wasn’t exactly sure what my research focus would be.” After graduating in December, Schneider had one semester before she was scheduled to enter CVM. She was introduced to Dr. David Smith, the first MSU-CVM Dr. Mikell and Mary Cheek Hall Davis Endowed Professor of Beef Cattle Health and Reproduction. Smith, a board-certified veterinary epidemiologist, came to CVM in 2013 from the University of Nebraska’s School of Veterinary Medicine and Biomedical Sciences. Through funds generated from the Davises’ endowment, Smith was able to hire Schneider to work on epidemiological research projects before she began her classes. “The Davises’ endowment has been such a tremendous gift to the college and the field. It gives us the ability to foster new research with undergraduate, professional, and graduate students,” Smith said. “Because of the endowment, we have been able to support three MSU undergraduate students working on beef cattle-related research, fund research allowing two veterinary students to complete summer research projects, and provide population medicine experiences for veterinary students from the University of Missouri and the University of Sydney.”

With nearly a million cattle in Mississippi’s 82 counties, meeting producers’ needs is a priority for MSU’s veterinary college. Smith’s 30 years of experience in cattle production systems and disease control prepared him to assist the 17,000 beef cattle farms in Mississippi. Since arriving at CVM, Smith has involved students in every aspect of fieldwork and research to address industry challenges. Schneider dove into disease research. She has submitted abstracts at national meetings and has been recognized for her work. She won second place in the annual Association of Bovine Practitioners’ graduate student competition for her study on factors affecting E.coli O157:H7 hide contamination in feedlot cattle. She was also awarded for a presentation on the effect of morbidity on weaning weight of beef calves at the Conference for Research Workers in Animal Disease. “Liesel’s research, along with projects being conducted by Min Wang and Danielle Doyle, also PhD students, will be directly useful to cattle producers,” Smith said. “The students are learning, and the industry is benefiting.” Smith and his team are sharing expertise and resources with MSU’s Department of Animal and Dairy Sciences. “We are trying to anticipate questions the beef industry will be asking as the industry evolves. For example, by studying ways to prevent pneumonia in calves,” Smith said. “It’s important to give producers alternatives to antibiotics—something outside of mass medication. It’s nice to get 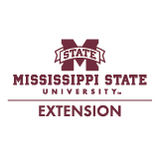