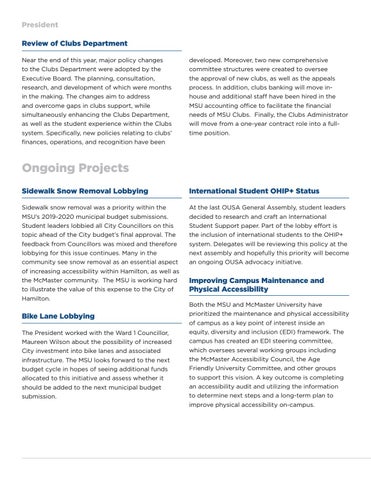 President Review of Clubs Department Near the end of this year, major policy changes to the Clubs Department were adopted by the Executive Board. The planning, consultation, research, and development of which were months in the making. The changes aim to address and overcome gaps in clubs support, while simultaneously enhancing the Clubs Department, as well as the student experience within the Clubs system. Specifically, new policies relating to clubs’ finances, operations, and recognition have been

developed. Moreover, two new comprehensive committee structures were created to oversee the approval of new clubs, as well as the appeals process. In addition, clubs banking will move inhouse and additional staff have been hired in the MSU accounting office to facilitate the financial needs of MSU Clubs. Finally, the Clubs Administrator will move from a one-year contract role into a fulltime position.

Sidewalk snow removal was a priority within the MSU’s 2019-2020 municipal budget submissions. Student leaders lobbied all City Councillors on this topic ahead of the City budget’s final approval. The feedback from Councillors was mixed and therefore lobbying for this issue continues. Many in the community see snow removal as an essential aspect of increasing accessibility within Hamilton, as well as the McMaster community. The MSU is working hard to illustrate the value of this expense to the City of Hamilton.

At the last OUSA General Assembly, student leaders decided to research and craft an International Student Support paper. Part of the lobby effort is the inclusion of international students to the OHIP+ system. Delegates will be reviewing this policy at the next assembly and hopefully this priority will become an ongoing OUSA advocacy initiative.

Bike Lane Lobbying The President worked with the Ward 1 Councillor, Maureen Wilson about the possibility of increased City investment into bike lanes and associated infrastructure. The MSU looks forward to the next budget cycle in hopes of seeing additional funds allocated to this initiative and assess whether it should be added to the next municipal budget submission.

Improving Campus Maintenance and Physical Accessibility Both the MSU and McMaster University have prioritized the maintenance and physical accessibility of campus as a key point of interest inside an equity, diversity and inclusion (EDI) framework. The campus has created an EDI steering committee, which oversees several working groups including the McMaster Accessibility Council, the Age Friendly University Committee, and other groups to support this vision. A key outcome is completing an accessibility audit and utilizing the information to determine next steps and a long-term plan to improve physical accessibility on-campus.

The Board of Directors has been hard at work over the past 12 months to accomplish a variety of projects which enhance student life. This document highlights just a few of the projects they worked on throughout the year. To learn more and to read each of the Board of Directors' full reports, visit msumcmaster.ca/sradocs. 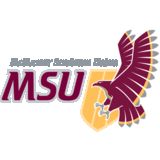