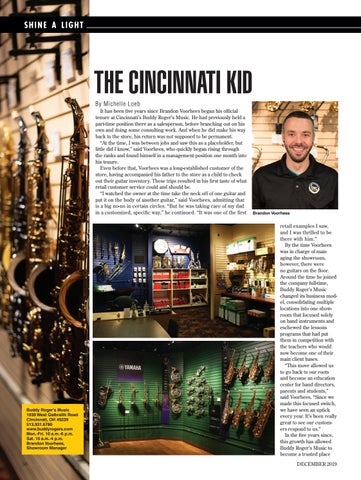 THE CINCINNATI KID By Michelle Loeb

It has been five years since Brandon Voorhees began his official tenure at Cincinnati’s Buddy Roger’s Music. He had previously held a part-time position there as a salesperson, before branching out on his own and doing some consulting work. And when he did make his way back to the store, his return was not supposed to be permanent. “At the time, I was between jobs and saw this as a placeholder, but little did I know,” said Voorhees, who quickly began rising through the ranks and found himself in a management position one month into his tenure. Even before that, Voorhees was a long-established customer of the store, having accompanied his father to the store as a child to check out their guitar inventory. These trips resulted in his first taste of what retail customer service could and should be. “I watched the owner at the time take the neck off of one guitar and put it on the body of another guitar,” said Voorhees, admitting that is a big no-no in certain circles. “But he was taking care of my dad in a customized, specific way,” he continued. “It was one of the first

retail examples I saw, and I was thrilled to be there with him.” By the time Voorhees was in charge of managing the showroom, however, there were no guitars on the floor. Around the time he joined the company full-time, Buddy Roger’s Music changed its business model, consolidating multiple locations into one showroom that focused solely on band instruments and eschewed the lessons programs that had put them in competition with the teachers who would now become one of their main client bases. “This move allowed us to go back to our roots and become an education center for band directors, parents and students,” said Voorhees. “Since we made this focused switch, we have seen an uptick every year. It’s been really great to see our customers respond to us.” In the five years since, this growth has allowed Buddy Roger’s Music to become a trusted place DECEMBER 2019