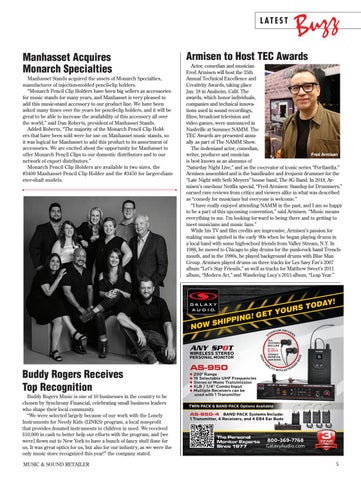 Actor, comedian and musician Fred Armisen will host the 35th Annual Technical Excellence and Creativity Awards, taking place Jan. 18 in Anaheim, Calif. The awards, which honor individuals, companies and technical innovations used in sound recordings, films, broadcast television and video games, were announced in Nashville at Summer NAMM. The TEC Awards are presented annually as part of The NAMM Show. The in-demand actor, comedian, Fred Armisen writer, producer and musician is best known as an alumnus of “Saturday Night Live,” and as the co-creator of iconic series “Portlandia.” Armisen assembled and is the bandleader and frequent drummer for the “Late Night with Seth Meyers” house band, The 8G Band. In 2018, Armisen’s one-hour Netflix special, “Fred Armisen: Standup for Drummers,” earned rave reviews from critics and viewers alike in what was described as “comedy for musicians but everyone is welcome.” “I have really enjoyed attending NAMM in the past, and I am so happy to be a part of this upcoming convention,” said Armisen. “Music means everything to me. I’m looking forward to being there and to getting to meet musicians and music fans.” While his TV and film credits are impressive, Armisen’s passion for making music ignited in the early ‘80s when he began playing drums in a local band with some high-school friends from Valley Stream, N.Y. In 1988, he moved to Chicago to play drums for the punk-rock band Trenchmouth, and in the 1990s, he played background drums with Blue Man Group. Armisen played drums on three tracks for Les Savy Fav’s 2007 album “Let’s Stay Friends,” as well as tracks for Matthew Sweet’s 2011 album, “Modern Art,” and Wandering Lucy’s 2015 album, “Leap Year.”

Buddy Rogers Music is one of 10 businesses in the country to be chosen by Synchrony Financial, celebrating small business leaders who shape their local community. “We were selected largely because of our work with the Lonely Instruments for Needy Kids (LINKS) program, a local non-profit that provides donated instruments to children in need. We received $10,000 in cash to better help our efforts with the program, and [we were] flown out to New York to have a bunch of fancy stuff done for us. It was great optics for us, but also for our industry, as we were the only music store recognized this year!” the company stated. MUSIC & SOUND RETAILER