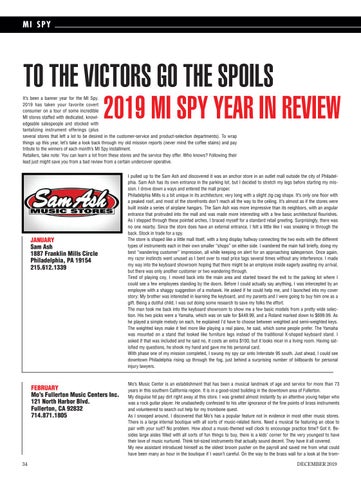 It’s been a banner year for the MI Spy. 2019 has taken your favorite covert consumer on a tour of some incredible MI stores staffed with dedicated, knowledgeable salespeople and stocked with tantalizing instrument offerings (plus several stores that left a lot to be desired in the customer-service and product-selection departments). To wrap things up this year, let’s take a look back through my old mission reports (never mind the coffee stains) and pay tribute to the winners of each month’s MI Spy installment. Retailers, take note: You can learn a lot from these stores and the service they offer. Who knows? Following their lead just might save you from a bad review from a certain undercover operative.

I pulled up to the Sam Ash and discovered it was an anchor store in an outlet mall outside the city of Philadelphia. Sam Ash has its own entrance in the parking lot, but I decided to stretch my legs before starting my mission. I drove down a ways and entered the mall proper. Philadelphia Mills is a bit unique in its architecture; very long with a slight zig-zag shape. It’s only one floor with a peaked roof, and most of the storefronts don’t reach all the way to the ceiling. It’s almost as if the stores were built inside a series of airplane hangars. The Sam Ash was more impressive than its neighbors, with an angular entrance that protruded into the mall and was made more interesting with a few basic architectural flourishes. As I stepped through these pointed arches, I braced myself for a standard retail greeting. Surprisingly, there was no one nearby. Since the store does have an external entrance, I felt a little like I was sneaking in through the back. Stock in trade for a spy. The store is shaped like a little mall itself, with a long display hallway connecting the two exits with the different types of instruments each in their own smaller “shops” on either side. I wandered the main hall briefly, doing my best “wandering customer” impression, all while keeping on alert for an approaching salesperson. Once again, my razor instincts went unused as I bent over to read price tags several times without any interference. I made my way into the keyboard showroom hoping that there might be an employee inside eagerly awaiting my arrival, but there was only another customer or two wandering through. Tired of playing coy, I moved back into the main area and started toward the exit to the parking lot where I could see a few employees standing by the doors. Before I could actually say anything, I was intercepted by an employee with a shaggy suggestion of a mohawk. He asked if he could help me, and I launched into my cover story: My brother was interested in learning the keyboard, and my parents and I were going to buy him one as a gift. Being a dutiful child, I was out doing some research to save my folks the effort. The man took me back into the keyboard showroom to show me a few basic models from a pretty wide selection. His two picks were a Yamaha, which was on sale for $449.99, and a Roland marked down to $699.99. As he played a simple melody on each, he explained I’d have to choose between weighted and semi-weighted keys. The weighted keys make it feel more like playing a real piano, he said, which some people prefer. The Yamaha was mounted on a stand that looked like furniture legs instead of the traditional X-shaped keyboard stand. I asked if that was included and he said no, it costs an extra $100, but it looks nicer in a living room. Having satisfied my questions, he shook my hand and gave me his personal card. With phase one of my mission completed, I swung my spy car onto Interstate 95 south. Just ahead, I could see downtown Philadelphia rising up through the fog, just behind a surprising number of billboards for personal injury lawyers.

Mo’s Music Center is an establishment that has been a musical landmark of age and service for more than 73 years in this southern California region. It is in a good-sized building in the downtown area of Fullerton. My disguise hit pay dirt right away at this store. I was greeted almost instantly by an attentive young helper who was a rock guitar player. He unabashedly confessed to his utter ignorance of the fine points of brass instruments and volunteered to search out help for my trombone quest. As I snooped around, I discovered that Mo’s has a popular feature not in evidence in most other music stores. There is a large internal boutique with all sorts of music-related items. Need a musical tie featuring an oboe to pair with your suit? No problem. How about a music-themed wall clock to encourage practice time? Got it. Besides large aisles filled with all sorts of fun things to buy, there is a kids’ corner for the very youngest to have their love of music nurtured. Think tot-sized instruments that actually sound decent. They have it all covered. My new assistant introduced himself as the oldest broom pusher on the payroll and saved me from what could have been many an hour in the boutique if I wasn’t careful. On the way to the brass wall for a look at the trom-