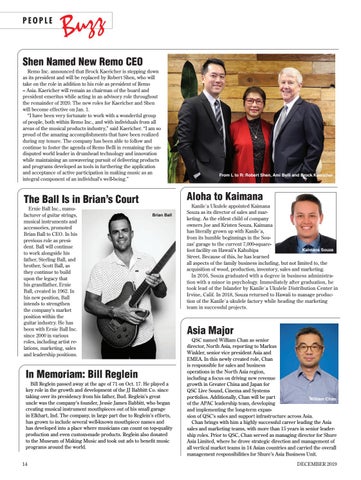 Remo Inc. announced that Brock Kaericher is stepping down as its president and will be replaced by Robert Shen, who will take on the role in addition to his role as president of Remo – Asia. Kaericher will remain as chairman of the board and president emeritus while acting in an advisory role throughout the remainder of 2020. The new roles for Kaericher and Shen will become effective on Jan. 1. “I have been very fortunate to work with a wonderful group of people, both within Remo Inc., and with individuals from all areas of the musical products industry,” said Kaericher. “I am so proud of the amazing accomplishments that have been realized during my tenure. The company has been able to follow and continue to foster the agenda of Remo Belli in remaining the undisputed world leader in drumhead technology and innovation while maintaining an unwavering pursuit of delivering products and programs developed as tools in furthering the application and acceptance of active participation in making music as an integral component of an individual’s well-being.”

The Ball Is in Brian’s Court Ernie Ball Inc., manufacturer of guitar strings, musical instruments and accessories, promoted Brian Ball to CEO. In his previous role as president. Ball will continue to work alongside his father, Sterling Ball, and brother, Scott Ball, as they continue to build upon the legacy that his grandfather, Ernie Ball, created in 1962. In his new position, Ball intends to strengthen the company’s market position within the guitar industry. He has been with Ernie Ball Inc. since 2000 in various roles, including artist relations, marketing, sales and leadership positions.

Bill Reglein passed away at the age of 71 on Oct. 17. He played a key role in the growth and development of the JJ Babbitt Co. since taking over its presidency from his father, Bud. Reglein’s great uncle was the company’s founder, Jessie James Babbitt, who began creating musical instrument mouthpieces out of his small garage in Elkhart, Ind. The company, in large part due to Reglein’s efforts, has grown to include several well-known mouthpiece names and has developed into a place where musicians can count on top-quality production and even custom-made products. Reglein also donated to the Museum of Making Music and took out ads to benefit music programs around the world.

Kanile`a Ukulele appointed Kaimana Souza as its director of sales and marketing. As the eldest child of company owners Joe and Kristen Souza, Kaimana has literally grown up with Kanile`a, from its humble beginnings in the Souzas’ garage to the current 7,000-squareKaimana Souza foot facility on Hawaii’s Kahuhipa Street. Because of this, he has learned all aspects of the family business including, but not limited to, the acquisition of wood, production, inventory, sales and marketing. In 2016, Souza graduated with a degree in business administration with a minor in psychology. Immediately after graduation, he took lead of the Islander by Kanile`a Ukulele Distribution Center in Ir vine, Calif. In 2018, Souza returned to Hawaii to manage production of the Kanile`a ukulele factory while heading the marketing team in successful projects.

QSC named William Chan as senior director, North Asia, reporting to Markus Winkler, senior vice president Asia and EMEA. In this newly created role, Chan is responsible for sales and business operations in the North Asia region, including a focus on driving new revenue growth in Greater China and Japan for QSC Live Sound, Cinema and Systems portfolios. Additionally, Chan will be part William Chan of the APAC leadership team, developing and implementing the long-term expansion of QSC’s sales and support infrastructure across Asia. Chan brings with him a highly successful career leading the Asia sales and marketing teams, with more than 15 years in senior leadership roles. Prior to QSC, Chan served as managing director for Shure Asia Limited, where he drove strategic direction and management of all vertical market teams in 14 Asian countries and carried the overall management responsibilities for Shure’s Asia Business Unit. DECEMBER 2019