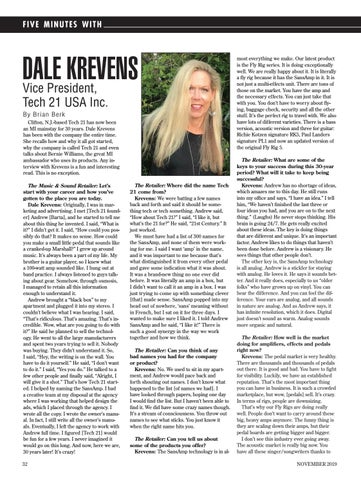 DALE KREVENS Vice President, Tech 21 USA Inc. By Brian Berk Clifton, N.J.-based Tech 21 has now been an MI mainstay for 30 years. Dale Krevens has been with the company the entire time. She recalls how and why it all got started, why the company is called Tech 21 and even talks about Bernie Williams, the great MI ambassador who uses its products. Any interview with Krevens is a fun and interesting read. This is no exception.

The Music &amp; Sound Retailer: Let’s start with your career and how you’ve gotten to the place you are today. Dale Krevens: Originally, I was in marketing and advertising. I met [Tech 21 founder] Andrew [Barta], and he started to tell me about this thing he invented. I said, “What is it?” I didn’t get it. I said, “How could you possibly do that? It makes no sense. How could you make a small little pedal that sounds like a cranked-up Marshall?” I grew up around music. It’s always been a part of my life. My brother is a guitar player, so I knew what a 100-watt amp sounded like. I hung out at band practice. I always listened to guys talking about gear. Somehow, through osmosis, I managed to retain all this information enough to understand it. Andrew brought a “black box” to my apartment and plugged it into my stereo. I couldn’t believe what I was hearing. I said, “That’s ridiculous. That’s amazing. That’s incredible. Wow, what are you going to do with it?” He said he planned to sell the technology. He went to all the large manufacturers and spent two years trying to sell it. Nobody was buying. They didn’t understand it. So, I said, “Hey, the writing is on the wall. You have to do it yourself.” He said, “I don’t want to do it.” I said, “Yes you do.” He talked to a few other people and finally said, “Alright, I will give it a shot.” That’s how Tech 21 started. I helped by naming the SansAmp. I had a creative team at my disposal at the agency where I was working that helped design the ads, which I placed through the agency. I wrote all the copy. I wrote the owner’s manual. In fact, I still write all the owner’s manuals. Eventually, I left the agency to work with Andrew full time. I figured [Tech 21] would be fun for a few years. I never imagined it would go on this long. And now, here we are, 30 years later! It’s crazy! 32

The Retailer: Where did the name Tech 21 come from? Krevens: We were batting a few names back and forth and said it should be something tech or tech something. Andrew said, “How about Tech 21?” I said, “I like it, but what’s the 21 for?” He said, “21st Century.” It just worked. We must have had a list of 300 names for the SansAmp, and none of them were working for me. I said I want ‘amp’ in the name, and it was important to me because that’s what distinguished it from every other pedal and gave some indication what it was about. It was a brand-new thing no one ever did before. It was literally an amp in a box, but I didn’t want to call it an amp in a box. I was just trying to come up with something clever [that] made sense. SansAmp popped into my head out of nowhere, ‘sans’ meaning without in French, but I sat on it for three days. I wanted to make sure I liked it. I told Andrew SansAmp and he said, “I like it!” There is such a good synergy in the way we work together and how we think. The Retailer: Can you think of any bad names you had for the company or product? Krevens: No. We used to sit in my apartment, and Andrew would pace back and forth shouting out names. I don’t know what happened to the list [of names we had]. I have looked through papers, hoping one day I would find the list. But I haven’t been able to find it. We did have some crazy names though. It’s a stream of consciousness. You throw out names to see what sticks. You just know it when the right name hits you. The Retailer: Can you tell us about some of the products you offer? Krevens: The SansAmp technology is in al-

most everything we make. Our latest product is the Fly Rig series. It is doing exceptionally well. We are really happy about it. It is literally a fly rig because it has the SansAmp in it. It is not just a multi-effects unit. There are tons of those on the market. You have the amp and the necessary effects. You can just take that with you. You don’t have to worry about flying, baggage check, security and all the other stuff. It’s the perfect rig to travel with. We also have lots of different varieties. There is a bass version, acoustic version and three for guitar: Richie Kotzen signature RK5, Paul Landers signature PL1 and now an updated version of the original Fly Rig 5.

The Retailer: What are some of the keys to your success during this 30-year period? What will it take to keep being successful? Krevens: Andrew has no shortage of ideas, which amazes me to this day. He still runs into my office and says, “I have an idea.” I tell him, “We haven’t finished the last three or four ideas you had, and you are on to the next thing.” (Laughs) He never stops thinking. His brain is going 24/7. He gets really excited about these ideas. The key is doing things that are different and unique. It’s an important factor. Andrew likes to do things that haven’t been done before. Andrew is a visionary. He sees things that other people don’t. The other key is, the SansAmp technology is all analog. Andrew is a stickler for staying with analog. He loves it. He says it sounds better. And it really does, especially to us “older folks” who have grown up on vinyl. You can hear the difference. And you can feel the difference. Your ears are analog, and all sounds in nature are analog. And as Andrew says, it has infinite resolution, which it does. Digital just doesn’t sound as warm. Analog sounds more organic and natural. The Retailer: How well is the market doing for amplifiers, effects and pedals right now? Krevens: The pedal market is very healthy. There are thousands and thousands of pedals out there. It is good and bad. You have to fight for visibility. Luckily, we have an established reputation. That’s the most important thing you can have in business. It is such a crowded marketplace, but wow, [pedals] sell. It’s crazy. In terms of rigs, people are downsizing. That’s why our Fly Rigs are doing really well. People don’t want to carry around these big, heavy amps anymore. The funny thing is they are scaling down their amps, but their pedal boards are getting bigger and bigger. I don’t see this industry ever going away. The acoustic market is really big now. You have all these singer/songwriters thanks to NOVEMBER 2019

In the November issue of the Music & Sound Retailer, learn the state of the accessories and bags and cases market, check out our salute to lesser publicized products, and much more.