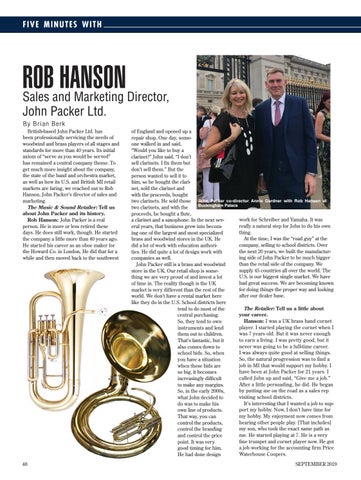 Sales and Marketing Director, John Packer Ltd. By Brian Berk British-based John Packer Ltd. has been professionally servicing the needs of woodwind and brass players of all stages and standards for more than 40 years. Its initial axiom of “serve as you would be served” has remained a central company theme. To get much more insight about the company, the state of the band and orchestra market, as well as how its U.S. and British MI retail markets are faring, we reached out to Rob Hanson, John Packer’s director of sales and marketing. The Music &amp; Sound Retailer: Tell us about John Packer and its histor y. Rob Hanson: John Packer is a real person. He is more or less retired these days. He does still work, though. He started the company a little more than 40 years ago. He started his career as an oboe maker for the Howard Co. in London. He did that for a while and then moved back to the southwest

of England and opened up a repair shop. One day, someone walked in and said, “Would you like to buy a clarinet?” John said, “I don’t sell clarinets. I fix them but don’t sell them.” But the person wanted to sell it to him, so he bought the clarinet, sold the clarinet and with the proceeds, bought two clarinets. He sold those John Packer co-director Annie Gardner with Rob Hanson at Buckingham Palace two clarinets, and with the proceeds, he bought a flute, work for Schreiber and Yamaha. It was a clarinet and a saxophone. In the next sevreally a natural step for John to do his own eral years, that business grew into becomthing. ing one of the largest and most specialized At the time, I was the “road guy” at the brass and woodwind stores in the UK. He company, selling to school districts. Over did a lot of work with education authorithe next 20 years, we built the manufacturties. He did quite a lot of design work with ing side of John Packer to be much bigger companies as well. than the retail side of the company. We John Packer still is a brass and woodwind supply 45 countries all over the world. The store in the UK. Our retail shop is someU.S. is our biggest single market. We have thing we are very proud of and invest a lot had great success. We are becoming known of time in. The reality though is the UK for doing things the proper way and looking market is very different than the rest of the after our dealer base. world. We don’t have a rental market here like they do in the U.S. School districts here The Retailer: Tell us a little about tend to do most of the your career. central purchasing. Hanson: I was a UK brass band cornet So, they tend to own player. I started playing the cornet when I instruments and lend was 7 years old. But it was never enough them out to children. to earn a living. I was pretty good, but it That’s fantastic, but it never was going to be a full-time career. also comes down to I was always quite good at selling things. school bids. So, when So, the natural progression was to find a you have a situation job in MI that would support my hobby. I when these bids are have been at John Packer for 21 years. I so big, it becomes called John up and said, “Give me a job.” increasingly difficult After a little persuading, he did. He began to make any margins. by putting me on the road as a sales rep So, in the early 2000s, visiting school districts. what John decided to It’s interesting that I wanted a job to supdo was to make his port my hobby. Now, I don’t have time for own line of products. my hobby. My enjoyment now comes from That way, you can hearing other people play. [That includes] control the products, my son, who took the exact same path as control the branding me. He started playing at 7. He is a very and control the price fine trumpet and cornet player now. He got point. It was very a job working for the accounting firm Price good timing for him. Waterhouse Coopers. He had done design SEPTEMBER 2019