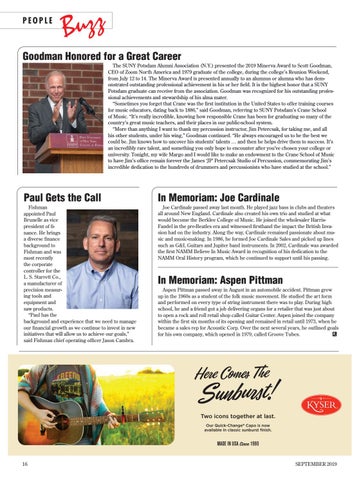 Goodman Honored for a Great Career

The SUNY Potsdam Alumni Association (N.Y.) presented the 2019 Minerva Award to Scott Goodman, CEO of Zoom North America and 1979 graduate of the college, during the college’s Reunion Weekend, from July 12 to 14. The Minerva Award is presented annually to an alumnus or alumna who has demonstrated outstanding professional achievement in his or her field. It is the highest honor that a SUNY Potsdam graduate can receive from the association. Goodman was recognized for his outstanding professional achievements and stewardship of his alma mater. “Sometimes you forget that Crane was the first institution in the United States to offer training courses for music educators, dating back to 1886,” said Goodman, referring to SUNY Potsdam’s Crane School of Music. “It’s really incredible, knowing how responsible Crane has been for graduating so many of the country’s great music teachers, and their places in our public-school system. “More than anything I want to thank my percussion instructor, Jim Petercsak, for taking me, and all his other students, under his wing,” Goodman continued. “He always encouraged us to be the best we could be. Jim knows how to uncover his students’ talents … and then he helps drive them to success. It’s an incredibly rare talent, and something you only hope to encounter after you’ve chosen your college or university. Tonight, my wife Margo and I would like to make an endowment to the Crane School of Music to have Jim’s office remain forever the James ‘JP’ Petercsak Studio of Percussion, commemorating Jim’s incredible dedication to the hundreds of drummers and percussionists who have studied at the school.”

Paul Gets the Call

Fishman appointed Paul Brunelle as vice president of finance. He brings a diverse finance background to Fishman and was most recently the corporate controller for the L. S. Starrett Co., a manufacturer of precision measuring tools and equipment and saw products. “Paul has the background and experience that we need to manage our financial growth as we continue to invest in new initiatives that will allow us to achieve our goals,” said Fishman chief operating officer Jason Cambra.

Joe Cardinale passed away last month. He played jazz bass in clubs and theaters all around New England. Cardinale also created his own trio and studied at what would become the Berklee College of Music. He joined the wholesaler HarrisFandel in the pre-Beatles era and witnessed firsthand the impact the British Invasion had on the industry. Along the way, Cardinale remained passionate about music and music-making. In 1986, he formed Joe Cardinale Sales and picked up lines such as G&amp;L Guitars and Jupiter band instruments. In 2002, Cardinale was awarded the first NAMM Believe In Music Award in recognition of his dedication to the NAMM Oral History program, which he continued to support until his passing.

Aspen Pittman passed away in August in an automobile accident. Pittman grew up in the 1960s as a student of the folk music movement. He studied the art form and performed on every type of string instrument there was to play. During high school, he and a friend got a job delivering organs for a retailer that was just about to open a rock and roll retail shop called Guitar Center. Aspen joined the company within the first six months of its opening and remained in retail until 1973, when he became a sales rep for Acoustic Corp. Over the next several years, he outlined goals for his own company, which opened in 1979, called Groove Tubes.

Two icons together at last. Our Quick-Change® Capo is now available in classic sunburst finish.