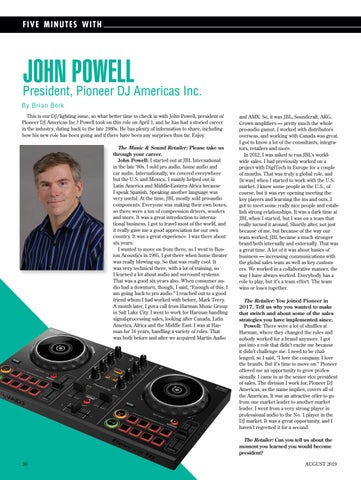 By Brian Berk This is our DJ/lighting issue, so what better time to check in with John Powell, president of Pioneer DJ Americas Inc.? Powell took on this role on April 1, and he has had a storied career in the industry, dating back to the late 1980s. He has plenty of information to share, including how his new role has been going and if there have been any surprises thus far. Enjoy.

The Music &amp; Sound Retailer: Please take us through your career. John Powell: I started out at JBL International in the late ‘80s. I sold pro audio, home audio and car audio. Internationally, we covered everywhere but the U.S. and Mexico. I mainly helped out in Latin America and Middle-Eastern Africa because I speak Spanish. Speaking another language was very useful. At the time, JBL mostly sold pro-audio components. Everyone was making their own boxes, so there were a ton of compression drivers, woofers and more. It was a great introduction to international business. I got to travel most of the world, and it really gave me a good appreciation for our own country. It was a great experience. I was there about six years. I wanted to move on from there, so I went to Boston Acoustics in 1995. I got there when home theater was really blowing up. So that was really cool. It was very technical there, with a lot of training, so I learned a lot about audio and surround systems. That was a good six years also. When consumer audio had a downturn, though, I said, “Enough of this. I am going back to pro audio.” I reached out to a good friend whom I had worked with before, Mark Terry. A month later, I got a call from Harman Music Group in Salt Lake City. I went to work for Harman handling signal-processing sales, looking after Canada, Latin America, Africa and the Middle East. I was at Harman for 16 years, handling a variety of roles. That was both before and after we acquired Martin Audio

and AMX. So, it was JBL, Soundcraft, AKG, Crown amplifiers — pretty much the whole pro-audio gamut. I worked with distributors overseas, and working with Canada was great. I got to know a lot of the consultants, integrators, retailers and more. In 2012, I was asked to run JBL’s worldwide sales. I had previously worked on a project with DigiTech in Europe for a couple of months. That was truly a global role, and [it was] when I started to work with the U.S. market. I knew some people in the U.S., of course, but it was eye opening meeting the key players and learning the ins and outs. I got to meet some really nice people and establish strong relationships. It was a dark time at JBL when I started, but I was on a team that really turned it around. Shortly after, not just because of me, but because of the way our team worked, JBL became a much stronger brand both internally and externally. That was a great time. A lot of it was about basics of business — increasing communications with the global sales team as well as key customers. We worked in a collaborative manner, the way I have always worked. Everybody has a role to play, but it’s a team effort. The team wins or loses together.

The Retailer: You joined Pioneer in 2017. Tell us why you wanted to make that switch and about some of the sales strategies you have implemented since. Powell: There were a lot of shuffles at Harman, where they changed the roles and nobody worked for a brand anymore. I got put into a role that didn’t excite me because it didn’t challenge me. I need to be challenged, so I said, “I love the company. I love the brands. But it’s time to move on.” Pioneer offered me an opportunity to grow professionally. I came in as the senior vice president of sales. The division I work for, Pioneer DJ Americas, as the name implies, covers all of the Americas. It was an attractive offer to go from one market leader to another market leader. I went from a very strong player in professional audio to the No. 1 player in the DJ market. It was a great opportunity, and I haven’t regretted it for a second. The Retailer: Can you tell us about the moment you learned you would become president?

In the August issue of the Music & Sound Retailer, we review the Summer NAMM Show, take an in-depth look at the DJ/lighting market, reveal Music & Sound Award winners in the Dealer Division, and interview Pioneer’s John Powell in Five Minutes With.