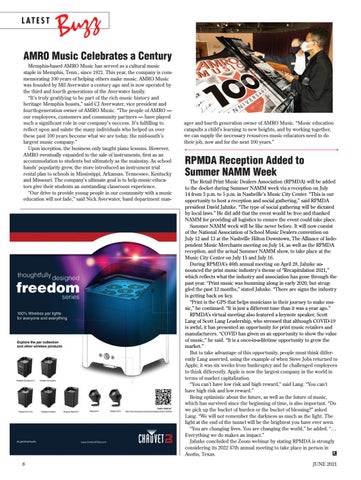 AMRO Music Celebrates a Century Memphis-based AMRO Music has served as a cultural music staple in Memphis, Tenn., since 1921. This year, the company is commemorating 100 years of helping others make music. AMRO Music was founded by Mil Averwater a century ago and is now operated by the third and fourth generations of the Averwater family. “It’s truly gratifying to be part of the rich music history and heritage Memphis boasts,” said CJ Averwater, vice president and fourth-generation owner of AMRO Music. “The people of AMRO — our employees, customers and community partners — have played such a significant role in our company’s success. It’s fulfilling to reflect upon and salute the many individuals who helped us over these past 100 years become what we are today, the mid-south’s largest music company.” Upon inception, the business only taught piano lessons. However, AMRO eventually expanded to the sale of instruments, first as an accommodation to students but ultimately as the mainstay. As school bands’ popularity grew, the store introduced an instrument trial rental plan to schools in Mississippi, Arkansas, Tennessee, Kentucky and Missouri. The company’s ultimate goal is to help music educators give their students an outstanding classroom experience. “Our drive to provide young people in our community with a music education will not fade,” said Nick Averwater, band department man-

ager and fourth generation owner of AMRO Music. “Music education catapults a child’s learning to new heights, and by working together, we can supply the necessary resources music educators need to do their job, now and for the next 100 years.”

The Retail Print Music Dealers Association (RPMDA) will be added to the docket during Summer NAMM week via a reception on July 14 from 3 p.m. to 5 p.m. in Nashville’s Music City Center. “This is our opportunity to host a reception and social gathering,” said RPMDA president David Jahnke. “The type of social gathering will be dictated by local laws.” He did add that the event would be free and thanked NAMM for providing all logistics to ensure the event could take place. Summer NAMM week will be like never before. It will now consist of the National Association of School Music Dealers convention on July 12 and 13 at the Nashville Hilton Downtown, The Alliance of Independent Music Merchants meeting on July 14, as well as the RPMDA reception, and the actual Summer NAMM show, to take place at the Music City Center on July 15 and July 16. During RPMDA’s 46th annual meeting on April 28, Jahnke announced the print music industry’s theme of “Recapitulation 2021,” which reflects what the industry and association has gone through the past year. “Print music was humming along in early 2020, but struggled the past 12 months,” stated Jahnke. “There are signs the industry is getting back on key. “Print is the GPS that helps musicians in their journey to make music,” he continued. “It is just a different tune than it was a year ago.” RPMDA’s virtual meeting also featured a keynote speaker, Scott Lang of Scott Lang Leadership, who stressed that although COVID-19 is awful, it has presented an opportunity for print music retailers and manufacturers. “COVID has given us an opportunity to show the value of music,” he said. “It is a once-in-a-lifetime opportunity to grow the market.” But to take advantage of this opportunity, people must think differently Lang asserted, using the example of when Steve Jobs returned to Apple, it was six weeks from bankruptcy and he challenged employees to think differently. Apple is now the largest company in the world in terms of market capitalization. “You can’t have low risk and high reward,” said Lang. “You can’t have high risk and low reward.” Being optimistic about the future, as well as the future of music, which has survived since the beginning of time, is also important. “Do we pick up the bucket of burden or the bucket of blessing?” asked Lang. “We will not remember the darkness as much as the light. The light at the end of the tunnel will be the brightest you have ever seen. “You are changing lives. You are changing the world,” he added. “… Everything we do makes an impact.” Jahnke concluded the Zoom webinar by stating RPMDA is strongly considering its 2022 47th annual meeting to take place in person in Austin, Texas. JUNE 2021