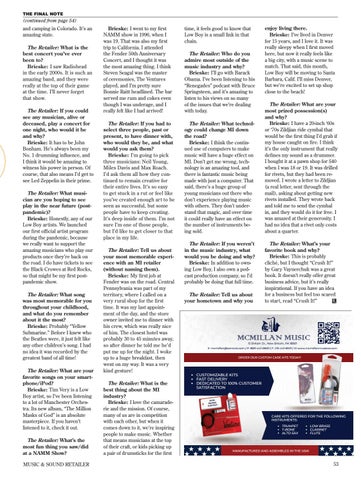 (continued from page 54) and camping in Colorado. It’s an amazing state.

The Retailer: What is the best concert you’ve ever been to? Brieske: I saw Radiohead in the early 2000s. It is such an amazing band, and they were really at the top of their game at the time. I’ll never forget that show. The Retailer: If you could see any musician, alive or deceased, play a concert for one night, who would it be and why? Brieske: It has to be John Bonham. He’s always been my No. 1 drumming influence, and I think it would be amazing to witness his power in person. Of course, that also means I’d get to see Led Zeppelin in their prime. The Retailer: What musician are you hoping to see play in the near future (postpandemic)? Brieske: Honestly, any of our Low Boy artists. We launched our first official artist program during the pandemic, because we really want to support the amazing musicians who play our products once they’re back on the road. I do have tickets to see the Black Crowes at Red Rocks, so that might be my first postpandemic show. The Retailer: What song was most memorable for you throughout your childhood, and what do you remember about it the most? Brieske: Probably “Yellow Submarine.” Before I knew who the Beatles were, it just felt like any other children’s song. I had no idea it was recorded by the greatest band of all time! The Retailer: What are your favorite songs on your smartphone/iPod? Brieske: Tim Very is a Low Boy artist, so I’ve been listening to a lot of Manchester Orchestra. Its new album, “The Million Masks of God” is an absolute masterpiece. If you haven’t listened to it, check it out. The Retailer: What’s the most fun thing you saw/did at a NAMM Show? MUSIC &amp; SOUND RETAILER

Brieske: I went to my first NAMM show in 1996, when I was 19. That was also my first trip to California. I attended the Fender 50th Anniversary Concert, and I thought it was the most amazing thing. I think Steven Seagal was the master of ceremonies, The Ventures played, and I’m pretty sure Bonnie Raitt headlined. The bar served me rum and cokes even though I was underage, and I really felt like I had arrived!

time, it feels good to know that Low Boy is a small link in that chain.

The Retailer: If you had to select three people, past or present, to have dinner with, who would they be, and what would you ask them? Brieske: I’m going to pick three musicians: Neil Young, Miles Davis and Max Roach. I’d ask them all how they continued to remain creative for their entire lives. It’s so easy to get stuck in a rut or feel like you’ve created enough art to be seen as successful, but some people have to keep creating. It’s deep inside of them. I’m not sure I’m one of those people, but I’d like to get closer to that place in my life.

The Retailer: What technology could change MI down the road? Brieske: I think the continued use of computers to make music will have a huge effect on MI. Don’t get me wrong, technology is an amazing tool, and there is fantastic music being made with just a computer. That said, there’s a huge group of young musicians out there who don’t experience playing music with others. They don’t understand that magic, and over time it could really have an effect on the number of instruments being sold.

The Retailer: Tell us about your most memorable experience with an MI retailer (without naming them). Brieske: My first job at Fender was on the road. Central Pennsylvania was part of my territory, where I called on a very rural shop for the first time. It was my last appointment of the day, and the store owner invited me to dinner with his crew, which was really nice of him. The closest hotel was probably 30 to 45 minutes away, so after dinner he told me he’d put me up for the night. I woke up to a huge breakfast, then went on my way. It was a very kind gesture! The Retailer: What is the best thing about the MI industr y? Brieske: I love the camaraderie and the mission. Of course, many of us are in competition with each other, but when it comes down to it, we’re inspiring people to make music. Whether that means musicians at the top of their craft, or kids picking up a pair of drumsticks for the first

The Retailer: Who do you admire most outside of the music industr y and why? Brieske: I’ll go with Barack Obama. I’ve been listening to his “Renegades” podcast with Bruce Springsteen, and it’s amazing to listen to his views on so many of the issues that we’re dealing with today.

The Retailer: If you weren’t in the music industr y, what would you be doing and why? Brieske: In addition to owning Low Boy, I also own a podcast production company, so I’d probably be doing that full time. The Retailer: Tell us about your hometown and why you

enjoy living there. Brieske: I’ve lived in Denver for 15 years, and I love it. It was really sleepy when I first moved here, but now it really feels like a big city, with a music scene to match. That said, this month, Low Boy will be moving to Santa Barbara, Calif. I’ll miss Denver, but we’re excited to set up shop close to the beach!

The Retailer: What are your most prized possession(s) and why? Brieske: I have a 20-inch ‘60s or ‘70s Zildjian ride cymbal that would be the first thing I’d grab if my house caught on fire. I think it’s the only instrument that really defines my sound as a drummer. I bought it at a pawn shop for $40 when I was 18 or 19. It was drilled for rivets, but they had been removed. I wrote a letter to Zildjian (a real letter, sent through the mail), asking about getting new rivets installed. They wrote back and told me to send the cymbal in, and they would do it for free. I was amazed at their generosity. I had no idea that a rivet only costs about a quarter. The Retailer: What’s your favorite book and why? Brieske: This is probably cliché, but I thought “Crush It!” by Gary Vaynerchuk was a great book. It doesn’t really offer great business advice, but it’s really inspirational. If you have an idea for a business but feel too scared to start, read “Crush It!”

MANUFACTURED AND ASSEMBLED IN THE USA!