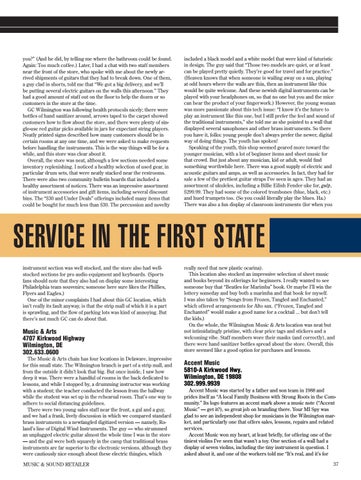 you?” (And he did, by telling me where the bathroom could be found. Again: Too much coffee.) Later, I had a chat with two staff members near the front of the store, who spoke with me about the newly arrived shipments of guitars that they had to break down. One of them, a guy clad in shorts, told me that “We got a big delivery, and we’ll be putting several electric guitars on the walls this afternoon.” They had a good amount of staff out on the floor to help the dozen or so customers in the store at the time. GC Wilmington was following health protocols nicely; there were bottles of hand sanitizer around, arrows taped to the carpet showed customers how to flow about the store, and there were plenty of single-use red guitar picks available in jars for expectant string players. Neatly printed signs described how many customers should be in certain rooms at any one time, and we were asked to make requests before handling the instruments. This is the way things will be for a while, and this store was clear about it. Overall, the store was neat, although a few sections needed some inventory replenishing. I noticed a healthy selection of used gear, in particular drum sets, that were neatly stacked near the restrooms. There were also two community bulletin boards that included a healthy assortment of notices. There was an impressive assortment of instrument accessories and gift items, including several discount bins. The “$30 and Under Deals” offerings included many items that could be bought for much less than $30. The percussion and novelty

included a black model and a white model that were kind of futuristic in design. The guy said that “Those two models are quiet, or at least can be played pretty quietly. They’re good for travel and for practice.” (Heaven knows that when someone is wailing away on a sax, playing at odd hours where the walls are thin, then an instrument like this would be quite welcome. And these newish digital instruments can be played with your headphones on, so that no one but you and the mice can hear the product of your fingerwork.) However, the young woman was more passionate about this tech issue: “I know it’s the future to play an instrument like this one, but I still prefer the feel and sound of the traditional instruments,” she told me as she pointed to a wall that displayed several saxophones and other brass instruments. So there you have it, folks: young people don’t always prefer the newer, digital way of doing things. The youth has spoken! Speaking of the youth, this shop seemed geared more toward the younger musician, with a lot of beginner items and sheet music for that crowd. But just about any musician, kid or adult, would find something worthwhile here. There was a good supply of electric and acoustic guitars and amps, as well as accessories. In fact, they had for sale a few of the prettiest guitar straps I’ve seen in ages. They had an assortment of ukuleles, including a Billie Eilish Fender uke for, gulp, $299.99. They had some of the colored trombones (blue, black, etc.) and hued trumpets too. (So you could literally play the blues. Ha.) There was also a fun display of classroom instruments (for when you

SERVICE IN THE FIRST STATE instrument section was well stocked, and the store also had wellstocked sections for pro audio equipment and keyboards. (Sports fans should note that they also had on display some interesting Philadelphia team souvenirs; someone here sure likes the Phillies, Flyers and Eagles.) One of the minor complaints I had about this GC location, which isn’t really its fault anyway, is that the strip mall of which it is a part is sprawling, and the flow of parking lots was kind of annoying. But there’s not much GC can do about that.

The Music &amp; Arts chain has four locations in Delaware, impressive for this small state. The Wilmington branch is part of a strip mall, and from the outside it didn’t look that big. But once inside, I saw how deep it was. There were a handful of rooms in the back dedicated to lessons, and while I stopped by, a drumming instructor was working with a student; the teacher conducted the lesson from the hallway while the student was set up in the rehearsal room. That’s one way to adhere to social distancing guidelines. There were two young sales staff near the front, a gal and a guy, and we had a frank, lively discussion in which we compared standard brass instruments to a newfangled digitized version — namely, Roland’s line of Digital Wind Instruments. The guy — who strummed an unplugged electric guitar almost the whole time I was in the store — and the gal were both squarely in the camp that traditional brass instruments are far superior to the electronic versions, although they were cautiously nice enough about these electric thingies, which MUSIC &amp; SOUND RETAILER

really need that new plastic ocarina). This location also stocked an impressive selection of sheet music and books beyond its offerings for beginners. I really wanted to see someone buy that “Beatles for Marimba” book. Or maybe I’ll win the lottery someday and buy both a marimba and that book for myself. I was also taken by “Songs from Frozen, Tangled and Enchanted,” which offered arrangements for Alto sax. (“Frozen, Tangled and Enchanted” would make a good name for a cocktail ... but don’t tell the kids.) On the whole, the Wilmington Music &amp; Arts location was neat but not intimidatingly pristine, with clear price tags and stickers and a welcoming vibe. Staff members wore their masks (and correctly), and there were hand sanitizer bottles spread about the store. Overall, this store seemed like a good option for purchases and lessons.

Accent Music was started by a father and son team in 1988 and prides itself as “A local Family Business with Strong Roots in the Community.” Its logo features an accent mark above a music note (“Accent Music” — get it?), so great job on branding there. Your MI Spy was glad to see an independent shop for musicians in the Wilmington market, and particularly one that offers sales, lessons, repairs and related services. Accent Music won my heart, at least briefly, for offering one of the tiniest violins I’ve seen that wasn’t a toy. One section of a wall had a display of seven violins, including the tiny instrument in question. I asked about it, and one of the workers told me “It’s real, and it’s for 37