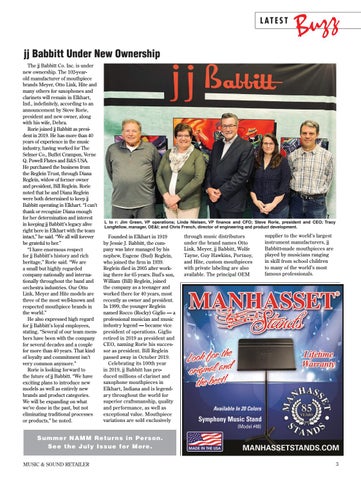 jj Babbitt Under New Ownership The jj Babbitt Co. Inc. is under new ownership. The 102-yearold manufacturer of mouthpiece brands Meyer, Otto Link, Hite and many others for saxophones and clarinets will remain in Elkhart, Ind., indefinitely, according to an announcement by Steve Rorie, president and new owner, along with his wife, Debra. Rorie joined jj Babbitt as president in 2019. He has more than 40 years of experience in the music industry, having worked for The Selmer Co., Buffet Crampon, Verne Q. Powell Flutes and B&amp;S USA. He purchased the business from the Reglein Trust, through Diana Reglein, widow of former owner and president, Bill Reglein. Rorie noted that he and Diana Reglein were both determined to keep jj Babbitt operating in Elkhart. “I can’t thank or recognize Diana enough for her determination and interest in keeping jj Babbitt’s legacy alive right here in Elkhart with the team intact,” he said. “We all will forever be grateful to her.” “I have enormous respect for jj Babbitt’s history and rich heritage,” Rorie said. “We are a small but highly regarded company nationally and internationally throughout the band and orchestra industries. Our Otto Link, Meyer and Hite models are three of the most well-known and respected mouthpiece brands in the world.” He also expressed high regard for jj Babbitt’s loyal employees, stating, “Several of our team members have been with the company for several decades and a couple for more than 40 years. That kind of loyalty and commitment isn’t very common anymore.” Rorie is looking forward to the future of jj Babbitt. “We have exciting plans to introduce new models as well as entirely new brands and product categories. We will be expanding on what we’ve done in the past, but not eliminating traditional processes or products,” he noted.

Founded in Elkhart in 1919 by Jessie J. Babbitt, the company was later managed by his nephew, Eugene (Bud) Reglein, who joined the firm in 1939. Reglein died in 2005 after working there for 65 years. Bud’s son, William (Bill) Reglein, joined the company as a teenager and worked there for 40 years, most recently as owner and president. In 1999, the younger Reglein named Rocco (Rocky) Giglio — a professional musician and music industry legend — became vice president of operations. Giglio retired in 2019 as president and CEO, naming Rorie his successor as president. Bill Reglein passed away in October 2019. Celebrating its 100th year in 2019, jj Babbitt has produced millions of clarinet and saxophone mouthpieces in Elkhart, Indiana and is legendar y throughout the world for superior craftsmanship, quality and performance, as well as exceptional value. Mouthpiece variations are sold exclusively

supplier to the world’s largest instrument manufacturers, jj Babbitt-made mouthpieces are played by musicians ranging in skill from school children to many of the world’s most famous professionals.