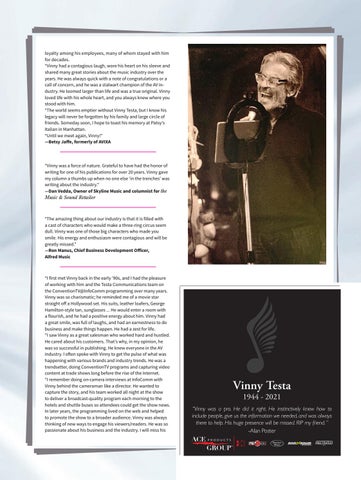 loyalty among his employees, many of whom stayed with him for decades. “Vinny had a contagious laugh, wore his heart on his sleeve and shared many great stories about the music industry over the years. He was always quick with a note of congratulations or a call of concern, and he was a stalwart champion of the AV industry. He loomed larger than life and was a true original. Vinny loved life with his whole heart, and you always knew where you stood with him. “The world seems emptier without Vinny Testa, but I know his legacy will never be forgotten by his family and large circle of friends. Someday soon, I hope to toast his memory at Patsy’s Italian in Manhattan. “Until we meet again, Vinny!” —Betsy Jaffe, formerly of AVIXA

“Vinny was a force of nature. Grateful to have had the honor of writing for one of his publications for over 20 years. Vinny gave my column a thumbs up when no one else ‘in the trenches’ was writing about the industry.” —Dan Vedda, Owner of Skyline Music and columnist for the

“The amazing thing about our industry is that it is filled with a cast of characters who would make a three-ring circus seem dull. Vinny was one of those big characters who made you smile. His energy and enthusiasm were contagious and will be greatly missed.” —Ron Manus, Chief Business Development Officer, Alfred Music

“I first met Vinny back in the early ’90s, and I had the pleasure of working with him and the Testa Communications team on the ConventionTV@InfoComm programming over many years. Vinny was so charismatic; he reminded me of a movie star straight off a Hollywood set. His suits, leather loafers, George Hamilton-style tan, sunglasses ... He would enter a room with a flourish, and he had a positive energy about him. Vinny had a great smile, was full of laughs, and had an earnestness to do business and make things happen. He had a zest for life. “I saw Vinny as a great salesman who worked hard and hustled. He cared about his customers. That’s why, in my opinion, he was so successful in publishing. He knew everyone in the AV industry. I often spoke with Vinny to get the pulse of what was happening with various brands and industry trends. He was a trendsetter, doing ConventionTV programs and capturing video content at trade shows long before the rise of the Internet. “I remember doing on-camera interviews at InfoComm with Vinny behind the cameraman like a director. He wanted to capture the story, and his team worked all night at the show to deliver a broadcast-quality program each morning to the hotels and shuttle buses so attendees could get the show news. In later years, the programming lived on the web and helped to promote the show to a broader audience. Vinny was always thinking of new ways to engage his viewers/readers. He was so passionate about his business and the industry. I will miss his