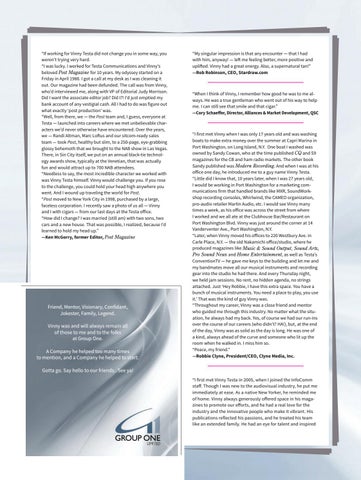 “If working for Vinny Testa did not change you in some way, you weren’t trying very hard. “I was lucky. I worked for Testa Communications and Vinny’s beloved Post Magazine for 10 years. My odyssey started on a Friday in April 1988. I got a call at my desk as I was cleaning it out. Our magazine had been defunded. The call was from Vinny, who’d interviewed me, along with VP of Editorial Judy Morrison. Did I want the associate editor job? Did I?! I’d just emptied my bank account of any vestigial cash. All I had to do was figure out what exactly ‘post production’ was. “Well, from there, we — the Post team and, I guess, everyone at Testa — launched into careers where we met unbelievable characters we’d never otherwise have encountered. Over the years, we — Randi Altman, Marc Loftus and our sitcom-ready sales team — took Post, healthy but slim, to a 250-page, eye-grabbing glossy behemoth that we brought to the NAB show in Las Vegas. There, in Sin City itself, we put on an annual black-tie technology awards show, typically at the Venetian, that was actually fun and would attract up to 700 NAB attendees. “Needless to say, the most incredible character we worked with was Vinny Testa himself. Vinny would challenge you. If you rose to the challenge, you could hold your head high anywhere you went. And I wound up traveling the world for Post. “Post moved to New York City in 1998, purchased by a large, faceless corporation. I recently saw a photo of us all — Vinny and I with cigars — from our last days at the Testa office. “How did I change? I was married (still am) with two sons, two cars and a new house. That was possible, I realized, because I’d learned to hold my head up.” —Ken McGorry, former Editor, Post Magazine

“My singular impression is that any encounter — that I had with him, anyway! — left me feeling better, more positive and uplifted. Vinny had a great energy. Also, a supernatural tan!” —Rob Robinson, CEO, Stardraw.com

“When I think of Vinny, I remember how good he was to me always. He was a true gentleman who went out of his way to help me. I can still see that smile and that cigar.” —Cory Schaeffer, Director, Alliances &amp; Market Development, QSC

“I first met Vinny when I was only 17 years old and was washing boats to make extra money over the summer at Capri Marina in Port Washington, on Long Island, N.Y. One boat I washed was owned by Sandy Cowan, who at the time published CQ and S9 magazines for the CB and ham radio markets. The other book Sandy published was Modern Recording. And when I was at his office one day, he introduced me to a guy name Vinny Testa. “Little did I know that, 10 years later, when I was 27 years old, I would be working in Port Washington for a marketing communications firm that handled brands like MXR, SoundWorkshop recording consoles, Whirlwind, the CAMEO organization, pro-audio retailer Martin Audio, etc. I would see Vinny many times a week, as his office was across the street from where I worked and we all ate at the Clubhouse Bar/Restaurant on Port Washington Blvd. Vinny was just around the corner at 14 Vanderventer Ave., Port Washington, N.Y. “Later, when Vinny moved his offices to 220 Westbury Ave. in Carle Place, N.Y. — the old Nakamichi office/studio, where he produced magazines like Music &amp; Sound Output, Sound Arts, Pro Sound News and Home Entertainment, as well as Testa’s ConventionTV — he gave me keys to the building and let me and my bandmates move all our musical instruments and recording gear into the studio he had there. And every Thursday night, we held jam sessions. No rent, no hidden agenda, no strings attached. Just ‘Hey Robbie, I have this extra space. You have a bunch of musical instruments. You need a place to play, you use it.’ That was the kind of guy Vinny was. “Throughout my career, Vinny was a close friend and mentor who guided me through this industry. No matter what the situation, he always had my back. Yes, of course we had our run-ins over the course of our careers (who didn’t? HA!), but, at the end of the day, Vinny was as solid as the day is long. He was one of a kind, always ahead of the curve and someone who lit up the room when he walked in. I miss him so. “Peace, my friend.” —Robbie Clyne, President/CEO, Clyne Media, Inc.

Gotta go. Say hello to our friends.. See ya! “I first met Vinny Testa in 2005, when I joined the InfoComm staff. Though I was new to the audiovisual industry, he put me immediately at ease. As a native New Yorker, he reminded me of home. Vinny always generously offered space in his magazines to promote our efforts, and he had a real love for the industry and the innovative people who make it vibrant. His publications reflected his passions, and he treated his team like an extended family. He had an eye for talent and inspired