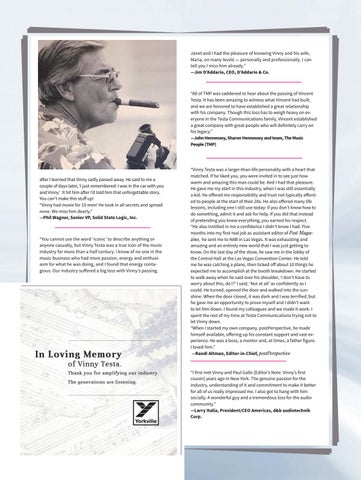 Janet and I had the pleasure of knowing Vinny and his wife, Maria, on many levels — personally and professionally. I can tell you I miss him already.” —Jim D’Addario, CEO, D’Addario &amp; Co.

“All of TMP was saddened to hear about the passing of Vincent Testa. It has been amazing to witness what Vincent had built, and we are honored to have established a great relationship with his company. Though this loss has to weigh heavy on everyone in the Testa Communications family, Vincent established a great company with great people who will definitely carry on his legacy.” —John Hennessey, Sharon Hennessey and team, The Music People (TMP)

after I learned that Vinny sadly passed away. He said to me a couple of days later, ‘I just remembered: I was in the car with you and Vinny.’ It hit him after I’d told him that unforgettable story. You can’t make this stuff up! “Vinny had moxie for 10 men! He took in all secrets and spread none. We miss him dearly.” —Phil Wagner, Senior VP, Solid State Logic, Inc.

“You cannot use the word ‘iconic’ to describe anything or anyone casually, but Vinny Testa was a true icon of the music industry for more than a half century. I know of no one in the music business who had more passion, energy and enthusiasm for what he was doing, and I found that energy contagious. Our industry suffered a big loss with Vinny’s passing.

“Vinny Testa was a larger-than-life personality with a heart that matched. If he liked you, you were invited in to see just how warm and amazing this man could be. And I had that pleasure. He gave me my start in this industry, when I was still essentially a kid. He offered me responsibility and trust not typically afforded to people at the start of their 20s. He also offered many life lessons, including one I still use today: If you don’t know how to do something, admit it and ask for help. If you did that instead of pretending you knew everything, you earned his respect. “He also instilled in me a confidence I didn&#39;t know I had. Five months into my first real job as assistant editor of Post Magazine, he sent me to NAB in Las Vegas. It was exhausting and amazing and an entirely new world that I was just getting to know. On the last day of the show, he saw me in the lobby of the Central Hall at the Las Vegas Convention Center. He told me he was catching a plane, then ticked off about 10 things he expected me to accomplish at the booth breakdown. He started to walk away when he said over his shoulder, ‘I don&#39;t have to worry about this, do I?’ I said, ‘Not at all’ as confidently as I could. He turned, opened the door and walked into the sunshine. When the door closed, it was dark and I was terrified, but he gave me an opportunity to prove myself and I didn&#39;t want to let him down. I found my colleagues and we made it work. I spent the rest of my time at Testa Communications trying not to let Vinny down. “When I started my own company, postPerspective, he made himself available, offering up his constant support and vast experience. He was a boss, a mentor and, at times, a father figure. I loved him.” —Randi Altman, Editor-in-Chief, postPerspective

“I first met Vinny and Paul Gallo [Editor’s Note: Vinny’s first cousin] years ago in New York. The genuine passion for the industry, understanding of it and commitment to make it better for all of us really impressed me. I also got to hang with him socially. A wonderful guy and a tremendous loss for the audio community.” —Larry Italia, President/CEO Americas, d&amp;b audiotechnik Corp.