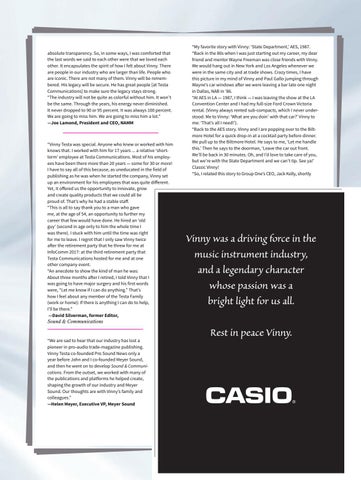 absolute transparency. So, in some ways, I was comforted that the last words we said to each other were that we loved each other. It encapsulates the spirit of how I felt about Vinny. There are people in our industry who are larger than life. People who are iconic. There are not many of them. Vinny will be remembered. His legacy will be secure. He has great people [at Testa Communications] to make sure the legacy stays strong. “The industry will not be quite as colorful without him. It won’t be the same. Through the years, his energy never diminished. It never dropped to 90 or 95 percent. It was always 100 percent. We are going to miss him. We are going to miss him a lot.” —Joe Lamond, President and CEO, NAMM

“Vinny Testa was special. Anyone who knew or worked with him knows that. I worked with him for 17 years ... a relative ‘shortterm’ employee at Testa Communications. Most of his employees have been there more than 20 years — some for 30 or more! I have to say all of this because, as uneducated in the field of publishing as he was when he started the company, Vinny set up an environment for his employees that was quite different. Yet, it offered us the opportunity to innovate, grow and create quality products that we could all be proud of. That’s why he had a stable staff. “This is all to say thank you to a man who gave me, at the age of 54, an opportunity to further my career that few would have done. He hired an ‘old guy’ (second in age only to him the whole time I was there). I stuck with him until the time was right for me to leave. I regret that I only saw Vinny twice after the retirement party that he threw for me at InfoComm 2017: at the third retirement party that Testa Communications hosted for me and at one other company event. “An anecdote to show the kind of man he was: About three months after I retired, I told Vinny that I was going to have major surgery and his first words were, “Let me know if I can do anything.” That’s how I feel about any member of the Testa Family (work or home): If there is anything I can do to help, I’ll be there.” —David Silverman, former Editor,

“My favorite story with Vinny: ‘State Department,’ AES, 1987. “Back in the 80s when I was just starting out my career, my dear friend and mentor Wayne Freeman was close friends with Vinny. We would hang out in New York and Los Angeles whenever we were in the same city and at trade shows. Crazy times, I have this picture in my mind of Vinny and Paul Gallo jumping through Wayne’s car windows after we were leaving a bar late one night in Dallas, NAB in ’86. “At AES in LA — 1987, I think — I was leaving the show at the LA Convention Center and I had my full-size Ford Crown Victoria rental. (Vinny always rented sub-compacts, which I never understood. Me to Vinny: ‘What are you doin’ with that car?’ Vinny to me: ‘That’s all I need!’). “Back to the AES story. Vinny and I are popping over to the Biltmore Hotel for a quick drop-in at a cocktail party before dinner. We pull up to the Biltmore Hotel. He says to me, ‘Let me handle this.’ Then he says to the doorman, ‘Leave the car out front. We’ll be back in 30 minutes. Oh, and I’d love to take care of you, but we&#39;re with the State Department and we can’t tip. See ya!’ Classic Vinny! “So, I related this story to Group One’s CEO, Jack Kelly, shortly

Vinny was a driving force in the music instrument industry, and a legendary character whose passion was a bright light for us all.

“We are sad to hear that our industry has lost a pioneer in pro-audio trade-magazine publishing. Vinny Testa co-founded Pro Sound News only a year before John and I co-founded Meyer Sound, and then he went on to develop Sound &amp; Communications. From the outset, we worked with many of the publications and platforms he helped create, shaping the growth of our industry and Meyer Sound. Our thoughts are with Vinny’s family and colleagues.” —Helen Meyer, Executive VP, Meyer Sound