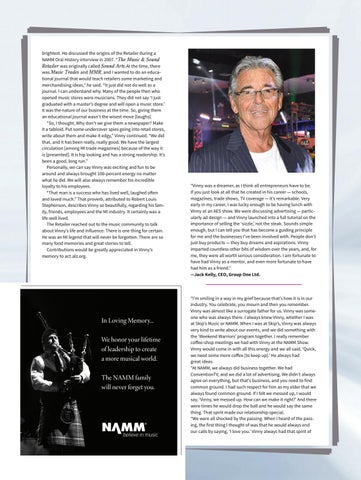 brightest. He discussed the origins of the Retailer during a NAMM Oral History interview in 2007. “The Music &amp; Sound Retailer was originally called Sound Arts.At the time, there was Music Trades and MMR, and I wanted to do an educational journal that would teach retailers some marketing and merchandising ideas,” he said. “It just did not do well as a journal. I can understand why. Many of the people then who opened music stores were musicians. They did not say ‘I just graduated with a master’s degree and will open a music store.’ It was the nature of our business at the time. So, giving them an educational journal wasn’t the wisest move [laughs]. “So, I thought, Why don’t we give them a newspaper? Make it a tabloid. Put some undercover spies going into retail stores, write about them and make it edgy,” Vinny continued. “We did that, and it has been really, really good. We have the largest circulation [among MI trade magazines] because of the way it is [presented]. It is hip looking and has a strong readership. It’s been a good, long run.” Personally, we can say Vinny was exciting and fun to be around and always brought 100-percent energy no matter what he did. We will also always remember his incredible loyalty to his employees. “That man is a success who has lived well, laughed often and loved much.” That proverb, attributed to Robert Louis Stephenson, describes Vinny so beautifully, regarding his family, friends, employees and the MI industry. It certainly was a life well lived. The Retailer reached out to the music community to talk about Vinny’s life and influence. There is one thing for certain. He was an MI legend that will never be forgotten. There are so many fond memories and great stories to tell. Contributions would be greatly appreciated in Vinny’s memory to act.alz.org.

“Vinny was a dreamer, as I think all entrepreneurs have to be. If you just look at all that he created in his career — schools, magazines, trade shows, TV coverage — it’s remarkable. Very early in my career, I was lucky enough to be having lunch with Vinny at an AES show. We were discussing advertising — particularly ad design — and Vinny launched into a full tutorial on the importance of selling the ‘sizzle,’ not the steak. Sounds simple enough, but I can tell you that has become a guiding principle for me and the businesses I’ve been involved with. People don’t just buy products — they buy dreams and aspirations. Vinny imparted countless other bits of wisdom over the years, and, for me, they were all worth serious consideration. I am fortunate to have had Vinny as a mentor, and even more fortunate to have had him as a friend.” —Jack Kelly, CEO, Group One Ltd.

“I’m smiling in a way in my grief because that’s how it is in our industry. You celebrate, you mourn and then you remember. Vinny was almost like a surrogate father for us. Vinny was someone who was always there. I always knew Vinny, whether I was at Skip’s Music or NAMM. When I was at Skip’s, Vinny was always very kind to write about our events, and we did something with the ‘Weekend Warriors’ program together. I really remember coffee-shop meetings we had with Vinny at the NAMM Show. Vinny would come in with all this energy and we all said, ‘Quick, we need some more coffee [to keep up].’ He always had great ideas. “At NAMM, we always did business together. We had ConventionTV, and we did a lot of advertising. We didn’t always agree on everything, but that’s business, and you need to find common ground. I had such respect for him as my elder that we always found common ground. If I felt we messed up, I would say, ‘Vinny, we messed up. How can we make it right?’ And there were times he would drop the ball and he would say the same thing. That spirit made our relationship special. “We were all shocked by the passing. When I heard of the passing, the first thing I thought of was that he would always end our calls by saying, ‘I love you.’ Vinny always had that spirit of