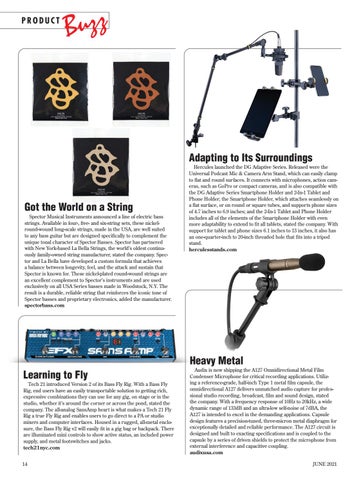 Adapting to Its Surroundings

Got the World on a String

Spector Musical Instruments announced a line of electric bass strings. Available in four-, five- and six-string sets, these nickelround-wound long-scale strings, made in the USA, are well suited to any bass guitar but are designed specifically to complement the unique tonal character of Spector Basses. Spector has partnered with New York-based La Bella Strings, the world’s oldest continuously family-owned string manufacturer, stated the company. Spector and La Bella have developed a custom formula that achieves a balance between longevity, feel, and the attack and sustain that Spector is known for. These nickel-plated round-wound strings are an excellent complement to Spector’s instruments and are used exclusively on all USA Series basses made in Woodstock, N.Y. The result is a durable, reliable string that reinforces the iconic tone of Spector basses and proprietary electronics, added the manufacturer. spectorbass.com

Hercules launched the DG Adaptive Series. Released were the Universal Podcast Mic &amp; Camera Arm Stand, which can easily clamp to flat and round surfaces. It connects with microphones, action cameras, such as GoPro or compact cameras, and is also compatible with the DG Adaptive Series Smartphone Holder and 2-In-1 Tablet and Phone Holder; the Smartphone Holder, which attaches seamlessly on a flat surface, or on round or square tubes, and supports phone sizes of 4.7 inches to 6.9 inches; and the 2-In-1 Tablet and Phone Holder includes all of the elements of the Smartphone Holder with even more adaptability to extend to fit all tablets, stated the company. With support for tablet and phone sizes 6.1 inches to 13 inches, it also has an one-quarter-inch to 20-inch threaded hole that fits into a tripod stand. herculesstands.com

Tech 21 introduced Version 2 of its Bass Fly Rig. With a Bass Fly Rig, end users have an easily transportable solution to getting rich, expressive combinations they can use for any gig, on stage or in the studio, whether it’s around the corner or across the pond, stated the company. The all-analog SansAmp heart is what makes a Tech 21 Fly Rig a true Fly Rig and enables users to go direct to a PA or studio mixers and computer interfaces. Housed in a rugged, all-metal enclosure, the Bass Fly Rig v2 will easily fit in a gig bag or backpack. There are illuminated mini controls to show active status, an included power supply, and metal footswitches and jacks. tech21nyc.com

Audix is now shipping the A127 Omnidirectional Metal Film Condenser Microphone for critical recording applications. Utilizing a reference-grade, half-inch Type 1 metal film capsule, the omnidirectional A127 delivers unmatched audio capture for professional studio recording, broadcast, film and sound design, stated the company. With a frequency response of 10Hz to 20kHz, a wide dynamic range of 133dB and an ultra-low self-noise of 7dBA, the A127 is intended to excel in the demanding applications. Capsule design features a precision-tuned, three-micron metal diaphragm for exceptionally detailed and reliable performance. The A127 circuit is designed and built to exacting specifications and is coupled to the capsule by a series of driven shields to protect the microphone from external interference and capacitive coupling. audixusa.com JUNE 2021