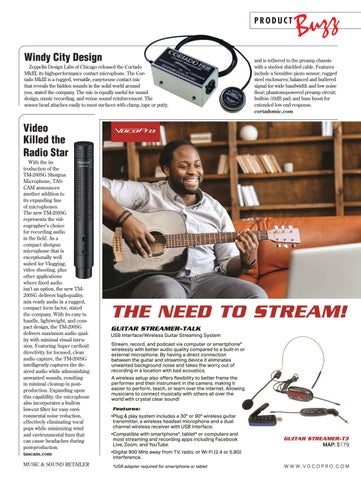 Zeppelin Design Labs of Chicago released the Cortado MkIII, its high-performance contact microphone. The Cortado MkIII is a rugged, versatile, easy-to-use contact mic that reveals the hidden sounds in the solid world around you, stated the company. The mic is equally useful for sound design, music recording, and venue sound reinforcement. The sensor head attaches easily to most surfaces with clamp, tape or putty,

With the introduction of the TM-200SG Shotgun Microphone, TASCAM announces another addition to its expanding line of microphones. The new TM-200SG represents the videographer’s choice for recording audio in the field. As a compact shotgun microphone that is exceptionally well suited for Vlogging, video shooting, plus other applications where fixed audio isn’t an option, the new TM200SG delivers high-quality, mix ready audio in a rugged, compact form factor, stated the company. With its easy to handle, lightweight, and compact design, the TM-200SG delivers maximum audio quality with minimal visual intrusion. Featuring Super cardioid directivity for focused, clean audio capture, the TM-200SG intelligently captures the desired audio while admonishing unwanted sounds, resulting in minimal cleanup in postproduction. Expanding upon this capability, the microphone also incorporates a built-in low-cut filter for easy environmental noise reduction, effectively eliminating vocal pops while minimizing wind and environmental hum that can cause headaches during post-production. tascam.com