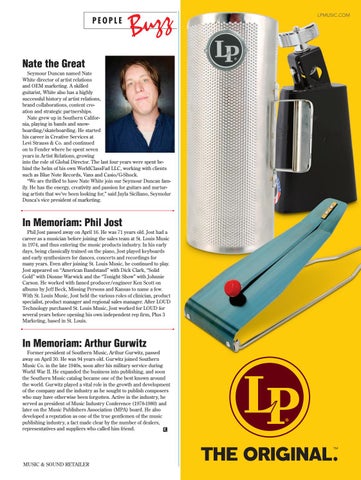 Seymour Duncan named Nate White director of artist relations and OEM marketing. A skilled guitarist, White also has a highly successful history of artist relations, brand collaborations, content creation and strategic partnerships. Nate grew up in Southern California, playing in bands and snowboarding/skateboarding. He started his career in Creative Services at Levi Strauss &amp; Co. and continued on to Fender where he spent seven years in Artist Relations, growing into the role of Global Director. The last four years were spent behind the helm of his own WorldClassFad LLC, working with clients such as Blue Note Records, Vans and Casio/G-Shock. “We are thrilled to have Nate White join our Seymour Duncan family. He has the energy, creativity and passion for guitars and nurturing artists that we’ve been looking for,” said Jayla Siciliano, Seymolur Dunca’s vice president of marketing.

Phil Jost passed away on April 16. He was 71 years old. Jost had a career as a musician before joining the sales team at St. Louis Music in 1974, and thus entering the music products industry. In his early days, being classically trained on the piano, Jost played keyboards and early synthesizers for dances, concerts and recordings for many years. Even after joining St. Louis Music, he continued to play. Jost appeared on “American Bandstand” with Dick Clark, “Solid Gold” with Dionne Warwick and the “Tonight Show” with Johnnie Carson. He worked with famed producer/engineer Ken Scott on albums by Jeff Beck, Missing Persons and Kansas to name a few. With St. Louis Music, Jost held the various roles of clinician, product specialist, product manager and regional sales manager. After LOUD Technology purchased St. Louis Music, Jost worked for LOUD for several years before opening his own independent rep firm, Plus 3 Marketing, based in St. Louis.

Former president of Southern Music, Arthur Gurwitz, passed away on April 30. He was 94 years old. Gurwitz joined Southern Music Co. in the late 1940s, soon after his military service during World War II. He expanded the business into publishing, and soon the Southern Music catalog became one of the best known around the world. Gurwitz played a vital role in the growth and development of the company and the industry as he sought to publish composers who may have otherwise been forgotten. Active in the industry, he served as president of Music Industry Conference (1978-1980) and later on the Music Publishers Association (MPA) board. He also developed a reputation as one of the true gentlemen of the music publishing industry, a fact made clear by the number of dealers, representatives and suppliers who called him friend.