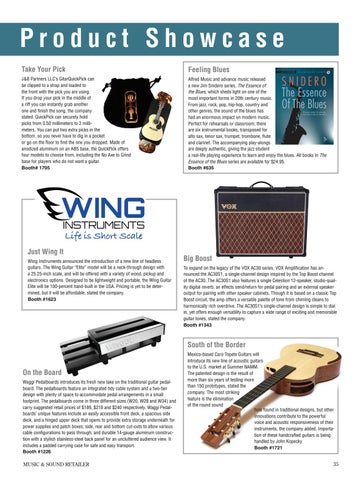 J&amp;B Partners LLC’s GitarQuickPick can be clipped to a strap and loaded to the front with the pick you are using. If you drop your pick in the middle of a riff you can instantly grab another one and finish the song, the company stated. QuickPick can securely hold picks from 0.50 millimeters to 2 millimeters. You can put two extra picks in the bottom, so you never have to dig in a pocket or go on the floor to find the one you dropped. Made of anodized aluminum on an ABS base, the QuickPick offers four models to choose from, including the No Axe to Grind base for players who do not want a guitar. Booth# 1705

Alfred Music and advance music released a new Jim Snidero series, The Essence of the Blues, which sheds light on one of the most important forms in 20th century music. From jazz, rock, pop, hip-hop, country and other genres, the sound of the blues has had an enormous impact on modern music. Perfect for rehearsals or classroom, there are six instrumental books, transposed for alto sax, tenor sax, trumpet, trombone, flute and clarinet. The accompanying play-alongs are deeply authentic, giving the jazz student a real-life playing experience to learn and enjoy the blues. All books in The Essence of the Blues series are available for $24.95. Booth #635

Just Wing It Wing Instruments announced the introduction of a new line of headless guitars. The Wing Guitar “Elite” model will be a neck-through design with a 25.25-inch scale, and will be offered with a variety of wood, pickup and electronics options. Designed to be lightweight and portable, the Wing Guitar Elite will be 100-percent hand-built in the USA. Pricing is yet to be determined, but it will be affordable, stated the company. Booth #1623

Big Boost To expand on the legacy of the VOX AC30 series, VOX Amplification has announced the AC30S1, a single-channel design inspired by the Top Boost channel of the AC30. The AC30S1 also features a single Celestion 12-speaker, studio-quality digital reverb, an effects send/return for pedal pairing and an external speaker output for pairing with other speaker cabinets. Though it is based on a classic Top Boost circuit, the amp offers a versatile palette of tone from chiming cleans to harmonically rich overdrive. The AC30S1’s single-channel design is simple to dial in, yet offers enough versatility to capture a wide range of exciting and memorable guitar tones, stated the company. Booth #1343

South of the Border

On the Board Waggi Pedalboards introduces its fresh new take on the traditional guitar pedalboard. The pedalboards feature an integrated tidy cable system and a two-tier design with plenty of space to accommodate pedal arrangements in a small footprint. The pedalboards come in three different sizes (W20, W28 and W34) and carry suggested retail prices of $189, $218 and $240 respectively. Waggi Pedalboards’ unique features include an easily accessible front deck, a spacious side deck, and a hinged upper deck that opens to provide extra storage underneath for power supplies and patch boxes; side, rear and bottom cut-outs to allow various cable configurations to pass through; and durable 14-gauge aluminum construction with a stylish stainless-steel back panel for an uncluttered audience view. It includes a padded carrying case for safe and easy transport. Booth #1226

Mexico-based Caro Topete Guitars will introduce its new line of acoustic guitars to the U.S. market at Summer NAMM. The patented design is the result of more than six years of testing more than 150 prototypes, stated the company. The most striking feature is the elimination of the round sound hole found in traditional designs, but other innovations contribute to the powerful voice and acoustic responsiveness of their instruments, the company added. Importation of these handcrafted guitars is being handled by John Kopecky. Booth #1721