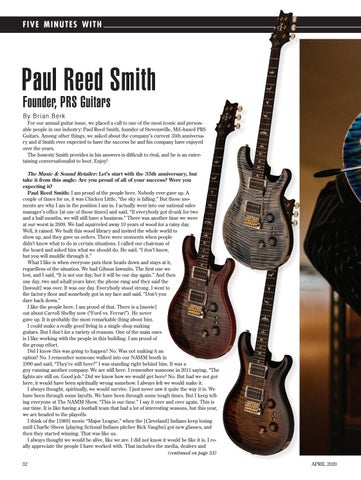 For our annual guitar issue, we placed a call to one of the most iconic and personable people in our industry: Paul Reed Smith, founder of Stevensville, Md.-based PRS Guitars. Among other things, we asked about the company’s current 35th anniversary and if Smith ever expected to have the success he and his company have enjoyed over the years. The honesty Smith provides in his answers is difficult to rival, and he is an entertaining conversationalist to boot. Enjoy!

The Music &amp; Sound Retailer: Let’s start with the 35th anniversar y, but take it from this angle: Are you proud of all of your success? Were you expecting it? Paul Reed Smith: I am proud of the people here. Nobody ever gave up. A couple of times for us, it was Chicken Little, “the sky is falling.” But those moments are why I am in the position I am in. I actually went into our national sales manager’s office [at one of those times] and said, “If everybody got drunk for two and a half months, we will still have a business.” There was another time we were at our worst in 2009. We had squirreled away 10 years of wood for a rainy day. Well, it rained. We built this wood library and invited the whole world to show up, and they gave us orders. There were moments when people didn’t know what to do in certain situations. I called our chairman of the board and asked him what we should do. He said, “I don’t know, but you will muddle through it.” What I like is when everyone puts their heads down and stays at it, regardless of the situation. We had Gibson lawsuits. The first one we lost, and I said, “It is not our day, but it will be our day again.” And then one day, two and a-half years later, the phone rang and they said the [lawsuit] was over. It was our day. Everybody stood strong. I went to the factory floor and somebody got in my face and said, “Don’t you dare back down.” I like the people here. I am proud of that. There is a [movie] out about Carroll Shelby now (“Ford vs. Ferrari”). He never gave up. It is probably the most remarkable thing about him. I could make a really good living in a single shop making guitars. But I don’t for a variety of reasons. One of the main ones is I like working with the people in this building. I am proud of the group effort. Did I know this was going to happen? No. Was not making it an option? No. I remember someone walked into our NAMM booth in 1990 and said, “They’re still here?” I was standing right behind him. It was a guy running another company. We are still here. I remember someone in 2011 saying, “The lights are still on. Good job.” Did we know how we would get here? No. But had we not got here, it would have been spiritually wrong somehow. I always felt we would make it. I always thought, spiritually, we would survive. I just never saw it quite the way it is. We have been through some layoffs. We have been through some tough times. But I keep telling everyone at The NAMM Show, “This is our time.” I say it over and over again. This is our time. It is like having a football team that had a lot of interesting seasons, but this year, we are headed to the playoffs. I think of the [1989] movie “Major League,” when the [Cleveland] Indians keep losing until Charlie Sheen [playing fictional Indians pitcher Rick Vaughn] got new glasses, and then they started winning. That was like us. I always thought we would be alive, like we are. I did not know it would be like it is. I really appreciate the people I have worked with. That includes the media, dealers and (continued on page 53) 32

In the April issue of the Music & Sound Retailer, we offer our annual guitar update, look at new companies that launched at The NAMM Show, and offer a special story about the commercial installation market.