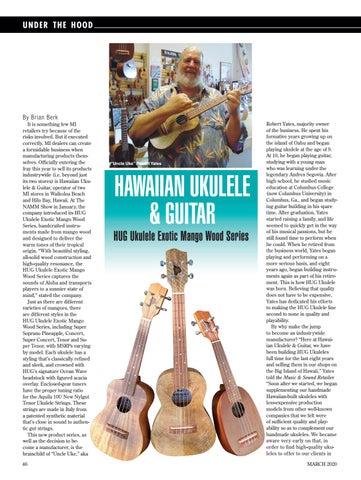 It is something few MI retailers try because of the risks involved. But if executed correctly, MI dealers can create a formidable business when manufacturing products themselves. Officially entering the fray this year to sell its products industrywide (i.e. beyond just its two stores) is Hawaiian Ukulele & Guitar, operator of two MI stores in Waikoloa Beach and Hilo Bay, Hawaii. At The NAMM Show in January, the company introduced its HUG Ukulele Exotic Mango Wood Series, handcrafted instruments made from mango wood and designed to deliver the warm tones of their tropical origin. “With beautiful styling, all-solid wood construction and high-quality resonance, the HUG Ukulele Exotic Mango Wood Series captures the sounds of Aloha and transports players to a sunnier state of mind,” stated the company. Just as there are different varieties of mangoes, there are different styles in the HUG Ukulele Exotic Mango Wood Series, including Super Soprano Pineapple, Concert, Super Concert, Tenor and Super Tenor, with MSRPs varying by model. Each ukulele has a styling that’s classically refined and sleek, and crowned with HUG’s signature Ocean Wave headstock with figured acacia overlay. Enclosed-gear tuners have the proper tuning ratio for the Aquila 10U New Nylgut Tenor Ukulele Strings. These strings are made in Italy from a patented synthetic material that’s close in sound to authentic gut strings. This new product series, as well as the decision to become a manufacturer, is the brainchild of “Uncle Uke,” aka

Robert Yates, majority owner of the business. He spent his formative years growing up on the island of Oahu and began playing ukulele at the age of 9. At 10, he began playing guitar, studying with a young man who was learning under the legendary Andres Segovia. After high school, he studied music education at Columbus College (now Columbus University) in Columbus, Ga., and began studying guitar building in his spare time. After graduation, Yates started raising a family, and life seemed to quickly get in the way of his musical passions, but he still found time to perform when he could. When he retired from the business world, Yates began playing and performing on a more serious basis, and eight years ago, began building instruments again as part of his retirement. This is how HUG Ukulele was born. Believing that quality does not have to be expensive, Yates has dedicated his efforts to making the HUG Ukulele line second to none in quality and playability. By why make the jump to become an industrywide manufacturer? “Here at Hawaiian Ukulele & Guitar, we have been building HUG Ukuleles full time for the last eight years and selling them in our shops on the Big Island of Hawaii,” Yates told the Music & Sound Retailer. “Soon after we started, we began supplementing our handmade Hawaiian-built ukuleles with less-expensive production models from other well-known companies that we felt were of sufficient quality and playability so as to complement our handmade ukuleles. We became aware ver y early on that, in order to find high-quality ukuleles to offer to our clients in MARCH 2020