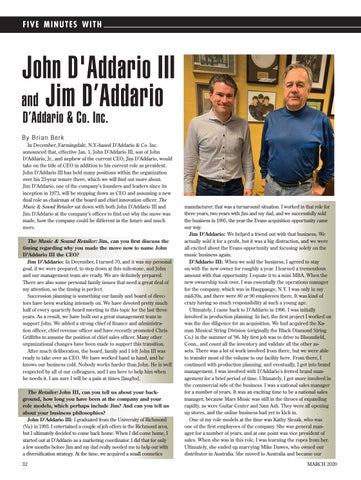 By Brian Berk In December, Farmingdale, N.Y.-based D’Addario & Co. Inc. announced that, effective Jan. 1, John D’Addario III, son of John D’Addario, Jr., and nephew of the current CEO, Jim D’Addario, would take on the title of CEO in addition to his current role as president. John D’Addario III has held many positions within the organization over his 23-year tenure there, which we will find out more about. Jim D’Addario, one of the company’s founders and leaders since its inception in 1973, will be stepping down as CEO and assuming a new dual role as chairman of the board and chief innovation officer. The Music & Sound Retailer sat down with both John D’Addario III and Jim D’Addario at the company’s offices to find out why the move was made, how the company could be different in the future and much more.

The Music & Sound Retailer: Jim, can you first discuss the timing regarding why you made the move now to name John D’Addario III the CEO? Jim D’Addario: In December, I turned 70, and it was my personal goal, if we were prepared, to step down at this milestone, and John and our management team are ready. We are definitely prepared. There are also some personal family issues that need a great deal of my attention, so the timing is perfect. Succession planning is something our family and board of directors have been working intensely on. We have devoted pretty much half of every quarterly board meeting to this topic for the last three years. As a result, we have built out a great management team to support John. We added a strong chief of finance and administration officer, chief revenue officer and have recently promoted Chris Griffiths to assume the position of chief sales officer. Many other organizational changes have been made to support this transition. After much deliberation, the board, family and I felt John III was ready to take over as CEO. We have worked hand in hand, and he knows our business cold. Nobody works harder than John. He is well respected by all of our colleagues, and I am here to help him when he needs it. I am sure I will be a pain at times [laughs]. The Retailer: John III, can you tell us about your background, how long you have been at the company and your role models, which perhaps include Jim? And can you tell us about your business philosophies? John D’Addario III: I graduated from the University of Richmond (Va.) in 1993. I entertained a couple of job offers in the Richmond area, but I ultimately decided to come back home. When I did come home, I started out at D’Addario as a marketing coordinator. I did that for only a few months before Jim and my dad really needed me to help out with a diversification strategy. At the time, we acquired a small cosmetics 32

manufacturer; that was a turnaround situation. I worked in that role for three years, two years with Jim and my dad, and we successfully sold the business in 1995, the year the Evans acquisition opportunity came our way. Jim D’Addario: We helped a friend out with that business. We actually sold it for a profit, but it was a big distraction, and we were all excited about the Evans opportunity and focusing solely on the music business again. D’Addario III: When we sold the business, I agreed to stay on with the new owner for roughly a year. I learned a tremendous amount with that opportunity. I equate it to a mini MBA. When the new ownership took over, I was essentially the operations manager for the company, which was in Hauppauge, N.Y. I was only in my mid-20s, and there were 80 or 90 employees there. It was kind of crazy having so much responsibility at such a young age. Ultimately, I came back to D’Addario in 1996. I was initially involved in production planning. In fact, the first project I worked on was the due diligence for an acquisition. We had acquired the Kaman Musical String Division (originally the Black Diamond String Co.) in the summer of ’96. My first job was to drive to Bloomfield, Conn., and count all the inventory and validate all the other assets. There was a lot of work involved from there, but we were able to transfer most of the volume to our facility here. From there, I continued with production planning, and eventually, I got into brand management. I was involved with D’Addario’s fretted brand management for a brief period of time. Ultimately, I got more involved in the commercial side of the business. I was a national sales manager for a number of years. It was an exciting time to be a national sales manager, because Mars Music was still in the throes of expanding rapidly, as were Guitar Center and Sam Ash. They were all opening up stores, and the online business had yet to kick in. One of my role models at the time was Kathy Slezak, who was one of the first employees of the company. She was general manager for a number of years, and at one point was vice president of sales. When she was in this role, I was learning the ropes from her. Ultimately, she ended up marrying Mike Dawes, who owned our distributor in Australia. She moved to Australia and became our MARCH 2020