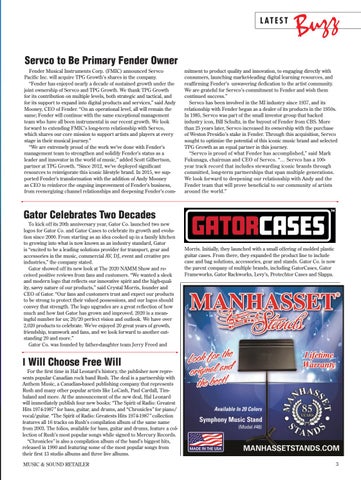 Servco to Be Primary Fender Owner Fender Musical Instruments Corp. (FMIC) announced Servco Pacific Inc. will acquire TPG Growth’s shares in the company. “Fender has enjoyed nearly a decade of sustained growth under the joint ownership of Servco and TPG Growth. We thank TPG Growth for its contribution on multiple levels, both strategic and tactical, and for its support to expand into digital products and services,” said Andy Mooney, CEO of Fender. “On an operational level, all will remain the same; Fender will continue with the same exceptional management team who have all been instrumental in our recent growth. We look forward to extending FMIC’s long-term relationship with Servco, which shares our core mission to support artists and players at every stage in their musical journey.” “We are extremely proud of the work we’ve done with Fender’s management team to strengthen and solidify Fender’s status as a leader and innovator in the world of music,” added Scott Gilbertson, partner at TPG Growth. “Since 2012, we’ve deployed significant resources to reinvigorate this iconic lifestyle brand. In 2015, we supported Fender’s transformation with the addition of Andy Mooney as CEO to reinforce the ongoing improvement of Fender’s business, from reenergizing channel relationships and deepening Fender’s com-

mitment to product quality and innovation, to engaging directly with consumers, launching market-leading digital learning resources, and reaffirming Fender’s unwavering dedication to the artist community. We are grateful for Servco’s commitment to Fender and wish them continued success.” Servco has been involved in the MI industry since 1937, and its relationship with Fender began as a dealer of its products in the 1950s. In 1985, Servco was part of the small investor group that backed industry icon, Bill Schultz, in the buyout of Fender from CBS. More than 25 years later, Servco increased its ownership with the purchase of Weston Presidio’s stake in Fender. Through this acquisition, Servco sought to optimize the potential of this iconic music brand and selected TPG Growth as an equal partner in this journey. “Ser vco is proud of what Fender has accomplished,” said Mark Fukunaga, chairman and CEO of Ser vco. “… Ser vco has a 100year track record that includes stewarding iconic brands through committed, long-term partnerships that span multiple generations. We look for ward to deepening our relationship with Andy and the Fender team that will prove beneficial to our community of artists around the world.”

To kick off its 20th anniversary year, Gator Co. launched two new logos for Gator Co. and Gator Cases to celebrate its growth and evolution since 2000. From starting as an idea cooked up in a family kitchen to growing into what is now known as an industry standard, Gator is “excited to be a leading solutions provider for transport, gear and accessories in the music, commercial AV, DJ, event and creative pro industries,” the company stated. Gator showed off its new look at The 2020 NAMM Show and received positive reviews from fans and customers. “We wanted a sleek and modern logo that reflects our innovative spirit and the high-quality, savvy nature of our products,” said Crystal Morris, founder and CEO of Gator. “Our fans and customers trust and expect our products to be strong to protect their valued possessions, and our logos should convey that strength. The logo upgrades are a great reflection of how much and how fast Gator has grown and improved. 2020 is a meaningful number for us; 20/20 perfect vision and outlook. We have over 2,020 products to celebrate. We’ve enjoyed 20 great years of growth, friendship, teamwork and fans, and we look forward to another outstanding 20 and more.” Gator Co. was founded by father-daughter team Jerry Freed and

Morris. Initially, they launched with a small offering of molded plastic guitar cases. From there, they expanded the product line to include case and bag solutions, accessories, gear and stands. Gator Co. is now the parent company of multiple brands, including GatorCases, Gator Frameworks, Gator Rackworks, Levy’s, Protechtor Cases and Slappa.

I Will Choose Free Will

For the first time in Hal Leonard’s history, the publisher now represents popular Canadian rock band Rush. The deal is a partnership with Anthem Music, a Canadian-based publishing company that represents Rush and many other popular artists like LoCash, Paul Cardall, Timbaland and more. At the announcement of the new deal, Hal Leonard will immediately publish four new books: “The Spirit of Radio: Greatest Hits 1974-1987” for bass, guitar, and drums, and “Chronicles” for piano/ vocal/guitar. “The Spirit of Radio: Greatests Hits 1974-1987” collection features all 16 tracks on Rush’s compilation album of the same name from 2003. The folios, available for bass, guitar and drums, feature a collection of Rush’s most popular songs while signed to Mercury Records. “Chronicles” is also a compilation album of the band’s biggest hits, released in 1990 and featuring some of the most popular songs from their first 13 studio albums and three live albums. MUSIC & SOUND RETAILER