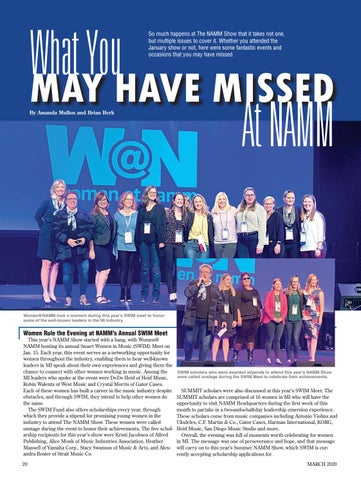 What You MAY HAVE MISSED At NAMM So much happens at The NAMM Show that it takes not one, but multiple issues to cover it. Whether you attended the January show or not, here were some fantastic events and occasions that you may have missed.

By Amanda Mullen and Brian Berk

Women@NAMM took a moment during this year’s SWIM meet to honor some of the well-known leaders in the MI industry.

This year’s NAMM Show started with a bang, with Women@ NAMM hosting its annual Smart Women in Music (SWIM) Meet on Jan. 15. Each year, this event serves as a networking opportunity for women throughout the industry, enabling them to hear well-known leaders in MI speak about their own experiences and giving them the chance to connect with other women working in music. Among the MI leaders who spoke at the event were DeDe Heid of Heid Music, Robin Walenta of West Music and Crystal Morris of Gator Cases. Each of these women has built a career in the music industry despite obstacles, and through SWIM, they intend to help other women do the same. The SWIM Fund also offers scholarships every year, through which they provide a stipend for promising young women in the industry to attend The NAMM Show. These women were called onstage during the event to honor their achievements. The five scholarship recipients for this year’s show were Kristi Jacobsen of Alfred Publishing, Alice Monk of Music Industries Association, Heather Mansell of Yamaha Corp., Stacy Swanson of Music & Arts, and Alexandra Bosier of Strait Music Co.

SWIM scholars who were awarded stipends to attend this year’s NAMM Show were called onstage during the SWIM Meet to celebrate their achievements.

SUMMIT scholars were also discussed at this year’s SWIM Meet. The SUMMIT scholars are comprised of 16 women in MI who will have the opportunity to visit NAMM Headquarters during the first week of this month to partake in a two-and-a-half-day leadership emersion experience. These scholars come from music companies including Antonio Violins and Ukuleles, C.F. Martin & Co., Gator Cases, Harman International, KORG, Heid Music, San Diego Music Studio and more. Overall, the evening was full of moments worth celebrating for women in MI. The message was one of perseverance and hope, and that message will carry on to this year’s Summer NAMM Show, which SWIM is currently accepting scholarship applications for. MARCH 2020