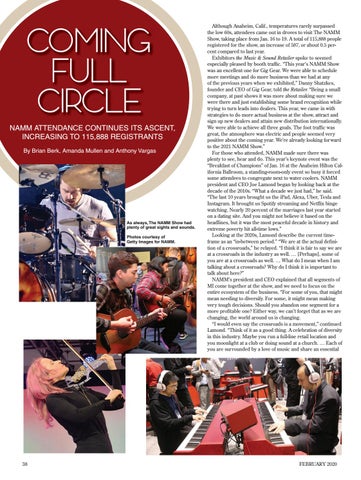 As always, The NAMM Show had plenty of great sights and sounds. Photos courtesy of Getty Images for NAMM.

Although Anaheim, Calif., temperatures rarely surpassed the low 60s, attendees came out in droves to visit The NAMM Show, taking place from Jan. 16 to 19. A total of 115,888 people registered for the show, an increase of 587, or about 0.5 percent compared to last year. Exhibitors the Music & Sound Retailer spoke to seemed especially pleased by booth traffic. “This year’s NAMM Show was an excellent one for Gig Gear. We were able to schedule more meetings and do more business than we had at any of the previous years when we exhibited,” Danny Shatzkes, founder and CEO of Gig Gear, told the Retailer. “Being a small company, at past shows it was more about making sure we were there and just establishing some brand recognition while trying to turn leads into dealers. This year, we came in with strategies to do more actual business at the show, attract and sign up new dealers and attain new distribution internationally. We were able to achieve all three goals. The foot traffic was great, the atmosphere was electric and people seemed very positive about the coming year. We’re already looking forward to the 2021 NAMM Show.” For those who attended, NAMM made sure there was plenty to see, hear and do. This year’s keynote event was the “Breakfast of Champions” of Jan. 16 at the Anaheim Hilton California Ballroom, a standing-room-only event so busy it forced some attendees to congregate next to water coolers. NAMM president and CEO Joe Lamond began by looking back at the decade of the 2010s. “What a decade we just had,” he said. “The last 10 years brought us the iPad, Alexa, Uber, Tesla and Instagram. It brought us Spotify streaming and Netflix binge watching. Nearly 20 percent of the marriages last year started on a dating site. And you might not believe it based on the headlines, but it was the most peaceful decade in history and extreme poverty hit all-time lows.” Looking at the 2020s, Lamond describe the current timeframe as an “in-between period.” “We are at the actual definition of a crossroads,” he relayed. “I think it is fair to say we are at a crossroads in the industry as well. … [Perhaps], some of you are at a crossroads as well. … What do I mean when I am talking about a crossroads? Why do I think it is important to talk about here?” NAMM’s president and CEO explained that all segments of MI come together at the show, and we need to focus on the entire ecosystem of the business. “For some of you, that might mean needing to diversify. For some, it might mean making very tough decisions. Should you abandon one segment for a more profitable one? Either way, we can’t forget that as we are changing, the world around us is changing. “I would even say the crossroads is a movement,” continued Lamond. “Think of it as a good thing. A celebration of diversity in this industry. Maybe you run a full-line retail location and you moonlight at a club or doing sound at a church. … Each of you are surrounded by a love of music and share an essential