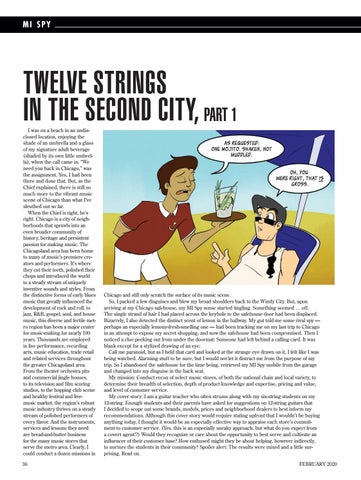 TWELVE STRINGS IN THE SECOND CITY, PART 1 I was on a beach in an undisclosed location, enjoying the shade of an umbrella and a glass of my signature adult beverage (shaded by its own little umbrella), when the call came in. “We need you back in Chicago,” was the assignment. Yes, I had been there and done that. But, as the Chief explained, there is still so much more to the vibrant music scene of Chicago than what I’ve sleuthed out so far. When the Chief is right, he’s right. Chicago is a city of neighborhoods that sprawls into an even broader community of history, heritage and persistent passion for making music. The Chicagoland area has been home to many of music’s premiere creators and performers. It’s where they cut their teeth, polished their chops and introduced the world to a steady stream of uniquely inventive sounds and styles. From the distinctive forms of early blues music that greatly influenced the development of rock and roll, to jazz, R&B, gospel, soul, and house music, this diverse and fertile metro region has been a major center for music-making for nearly 100 years. Thousands are employed in live performance, recording arts, music education, trade retail and related services throughout the greater Chicagoland area. From the theater orchestra pits and commercial jingle houses, to its television and film scoring studios, to the hopping club scene and healthy festival and livemusic market, the region’s robust music industry thrives on a steady stream of polished performers of every flavor. And the instruments, services and lessons they need are bread-and-butter business for the many music stores that serve the metro area. Clearly, I could conduct a dozen missions in

Chicago and still only scratch the surface of its music scene. So, I packed a few disguises and blew my broad shoulders back to the Windy City. But, upon arriving at my Chicago safehouse, my MI Spy sense started tingling. Something seemed … off. The single strand of hair I had placed across the keyhole to the safehouse door had been displaced. Bizarrely, I also detected the distinct scent of lemon in the hallway. My gut told me some rival spy — perhaps an especially lemony-fresh-smelling one — had been tracking me on my last trip to Chicago in an attempt to expose my secret shopping, and now the safehouse had been compromised. Then I noticed a clue peeking out from under the doormat: Someone had left behind a calling card. It was blank except for a stylized drawing of an eye. Call me paranoid, but as I held that card and looked at the strange eye drawn on it, I felt like I was being watched. Alarming stuff to be sure, but I would not let it distract me from the purpose of my trip. So I abandoned the safehouse for the time being, retrieved my MI Spy mobile from the garage and changed into my disguise in the back seat. My mission: Conduct recon of select music stores, of both the national chain and local variety, to determine their breadth of selection, depth of product knowledge and expertise, pricing and value, and level of customer service. My cover story: I am a guitar teacher who often strums along with my six-string students on my 12-string. Enough students and their parents have asked for suggestions on 12-string guitars that I decided to scope out some brands, models, prices and neighborhood dealers to best inform my recommendations. Although this cover story would require stating upfront that I wouldn’t be buying anything today, I thought it would be an especially effective way to appraise each store’s commitment to customer service. (Yes, this is an especially sneaky approach, but what do you expect from a covert agent!?) Would they recognize or care about the opportunity to best serve and cultivate an influencer of their customer base? How enthused might they be about helping, however indirectly, to nurture the students in their community? Spoiler alert: The results were mixed and a little surprising. Read on. FEBRUARY 2020