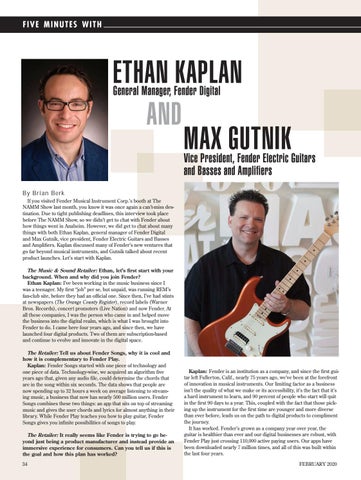 By Brian Berk If you visited Fender Musical Instrument Corp.’s booth at The NAMM Show last month, you know it was once again a can’t-miss destination. Due to tight publishing deadlines, this interview took place before The NAMM Show, so we didn’t get to chat with Fender about how things went in Anaheim. However, we did get to chat about many things with both Ethan Kaplan, general manager of Fender Digital and Max Gutnik, vice president, Fender Electric Guitars and Basses and Amplifiers. Kaplan discussed many of Fender’s new ventures that go far beyond musical instruments, and Gutnik talked about recent product launches. Let’s start with Kaplan.

The Music & Sound Retailer: Ethan, let’s first start with your background. When and why did you join Fender? Ethan Kaplan: I’ve been working in the music business since I was a teenager. My first “job” per se, but unpaid, was running REM’s fan-club site, before they had an official one. Since then, I’ve had stints at newspapers (The Orange County Register), record labels (Warner Bros. Records), concert promoters (Live Nation) and now Fender. At all these companies, I was the person who came in and helped move the business into the digital realm, which is what I was brought into Fender to do. I came here four years ago, and since then, we have launched four digital products. Two of them are subscription-based and continue to evolve and innovate in the digital space. The Retailer: Tell us about Fender Songs, why it is cool and how it is complementar y to Fender Play. Kaplan: Fender Songs started with one piece of technology and one piece of data. Technology-wise, we acquired an algorithm five years ago that, given any audio file, could determine the chords that are in the song within six seconds. The data shows that people are now spending up to 32 hours a week on average listening to streaming music, a business that now has nearly 500 million users. Fender Songs combines these two things: an app that sits on top of streaming music and gives the user chords and lyrics for almost anything in their library. While Fender Play teaches you how to play guitar, Fender Songs gives you infinite possibilities of songs to play. The Retailer: It really seems like Fender is tr ying to go beyond just being a product manufacturer and instead provide an immersive experience for consumers. Can you tell us if this is the goal and how this plan has worked? 34

Kaplan: Fender is an institution as a company, and since the first guitar left Fullerton, Calif., nearly 75 years ago, we’ve been at the forefront of innovation in musical instruments. Our limiting factor as a business isn’t the quality of what we make or its accessibility, it’s the fact that it’s a hard instrument to learn, and 90 percent of people who start will quit in the first 90 days to a year. This, coupled with the fact that those picking up the instrument for the first time are younger and more diverse than ever before, leads us on the path to digital products to compliment the journey. It has worked. Fender’s grown as a company year over year, the guitar is healthier than ever and our digital businesses are robust, with Fender Play just crossing 110,000 active paying users. Our apps have been downloaded nearly 7 million times, and all of this was built within the last four years. FEBRUARY 2020