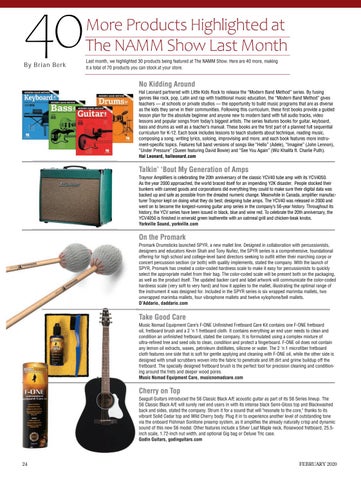 Last month, we highlighted 30 products being featured at The NAMM Show. Here are 40 more, making it a total of 70 products you can stock at your store.

No Kidding Around Hal Leonard partnered with Little Kids Rock to release the “Modern Band Method” series. By fusing genres like rock, pop, Latin and rap with traditional music education, the “Modern Band Method” gives teachers — at schools or private studios — the opportunity to build music programs that are as diverse as the kids they serve in their communities. Following this curriculum, these first books provide a guided lesson plan for the absolute beginner and anyone new to modern band with full audio tracks, video lessons and popular songs from today’s biggest artists. The series features books for guitar, keyboard, bass and drums as well as a teacher’s manual. These books are the first part of a planned full sequential curriculum for K-12. Each book includes lessons to teach students about technique, reading music, composing a song, writing lyrics, soloing, improvising and more, and each book features more instrument-specific topics. Features full band versions of songs like “Hello” (Adele), “Imagine” (John Lennon), “Under Pressure” (Queen featuring David Bowie) and “See You Again” (Wiz Khalifa ft. Charlie Puth). Hal Leonard, halleonard.com

Talkin’ ‘Bout My Generation of Amps Traynor Amplifiers is celebrating the 20th anniversary of the classic YCV40 tube amp with its YCV4050. As the year 2000 approached, the world braced itself for an impending Y2K disaster. People stocked their bunkers with canned goods and corporations did everything they could to make sure their digital data was backed up and safe as possible from the dreaded numeric change. Meanwhile in Canada, amplifier manufacturer Traynor kept on doing what they do best; designing tube amps. The YCV40 was released in 2000 and went on to become the longest-running guitar amp series in the company’s 56-year history. Throughout its history, the YCV series have been issued in black, blue and wine red. To celebrate the 20th anniversary, the YCV4050 is finished in emerald green leatherette with an oatmeal grill and chicken-beak knobs. Yorkville Sound, yorkville.com

On the Promark Promark Drumsticks launched SPYR, a new mallet line. Designed in collaboration with percussionists, designers and educators Kevin Shah and Tony Nuñez, the SPYR series is a comprehensive, foundational offering for high school and college-level band directors seeking to outfit either their marching corps or concert percussion section (or both) with quality implements, stated the company. With the launch of SPYR, Promark has created a color-coded hardness scale to make it easy for percussionists to quickly select the appropriate mallet from their bag. The color-coded scale will be present both on the packaging, as well as the product itself. The updated backer card and label artwork will communicate the color-coded hardness scale (very soft to very hard) and how it applies to the mallet, illustrating the optimal range of the instrument it was designed for. Included in the SPYR series is six wrapped marimba mallets, two unwrapped marimba mallets, four vibraphone mallets and twelve xylophone/bell mallets. D’Addario, daddario.com

Take Good Care Music Nomad Equipment Care’s F-ONE Unfinished Fretboard Care Kit contains one F-ONE fretboard oil, fretboard brush and a 2 ‘n 1 fretboard cloth. It contains everything an end user needs to clean and condition an unfinished fretboard, stated the company. It is formulated using a complex mixture of ultra-refined tree and seed oils to clean, condition and protect a fingerboard. F-ONE oil does not contain any lemon oil extracts, waxes, petroleum distillates, silicone or water. The 2 ‘n 1 microfiber fretboard cloth features one side that is soft for gentle applying and cleaning with F-ONE oil, while the other side is designed with small scrubbers woven into the fabric to penetrate and lift dirt and grime buildup off the fretboard. The specially designed fretboard brush is the perfect tool for precision cleaning and conditioning around the frets and deeper wood pores. Music Nomad Equipment Care, musicnomadcare.com

Cherry on Top Seagull Guitars introduced the S6 Classic Black A/E acoustic guitar as part of its S6 Series lineup. The S6 Classic Black A/E will surely reel end users in with its intense black Semi-Gloss top and Blackwashed back and sides, stated the company. Strum it for a sound that will "resonate to the core," thanks to its vibrant Solid Cedar top and Wild Cherry body. Plug it in to experience another level of outstanding tone via the onboard Fishman Sonitone preamp system, as it amplifies the already naturally crisp and dynamic sound of this new S6 model. Other features include a Silver Leaf Maple neck, Rosewood fretboard, 25.5inch scale, 1.72-inch nut width, and optional Gig bag or Deluxe Tric case. Godin Guitars, godinguitars.com