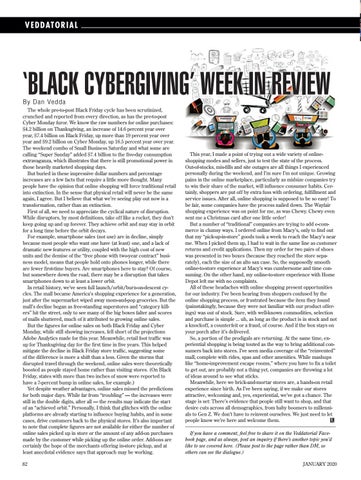 The whole pre-to-post Black Friday cycle has been scrutinized, crunched and reported from every direction, as has the pre-to-post Cyber Monday furor. We know the raw numbers for online purchases: $4.2 billion on Thanksgiving, an increase of 14.6 percent year over year, $7.4 billion on Black Friday, up more than 19 percent year over year and $9.2 billion on Cyber Monday, up 16.5 percent year over year. The weekend combo of Small Business Saturday and what some are calling “Super Sunday” added $7.4 billion to the five-day consumption extravaganza, which illustrates that there is still promotional power in those heavily marketed shopping days. But buried in these impressive dollar numbers and percentage increases are a few facts that require a little more thought. Many people have the opinion that online shopping will force traditional retail into extinction. In the sense that physical retail will never be the same again, I agree. But I believe that what we’re seeing play out now is a transformation, rather than an extinction. First of all, we need to appreciate the cyclical nature of disruption. While disruptors, by most definitions, take off like a rocket, they don’t keep going up and up forever. They achieve orbit and may stay in orbit for a long time before the orbit decays. For example, smartphone sales (not use) are in decline, simply because most people who want one have (at least) one, and a lack of dramatic new features or utility, coupled with the high cost of new units and the demise of the “free phone with two-year contract” business model, means that people hold onto phones longer, while there are fewer first-time buyers. Are smartphones here to stay? Of course, but somewhere down the road, there may be a disruption that takes smartphones down to at least a lower orbit. In retail history, we’ve seen full launch/orbit/burn-on-descent cycles. The mall became America’s shopping experience for a generation, just after the supermarket wiped away mom-and-pop groceries. But the mall’s decline began as free-standing superstores and “category killers” hit the street, only to see many of the big boxes falter and scores of malls shuttered, much of it attributed to growing online sales. But the figures for online sales on both Black Friday and Cyber Monday, while still showing increases, fell short of the projections Adobe Analytics made for this year. Meanwhile, retail foot traffic was up for Thanksgiving day for the first time in five years. This helped mitigate the decline in Black Friday store traffic, suggesting some of the difference is more a shift than a loss. Given the storms that disrupted travel through the weekend, online sales were theoretically boosted as people stayed home rather than visiting stores. (On Black Friday, states with more than two inches of snow were reported to have a 7-percent bump in online sales, for example.) Yet despite weather advantages, online sales missed the predictions for both major days. While far from “troubling” — the increases were still in the double digits, after all — the results may indicate the start of an “achieved orbit.” Personally, I think that glitches with the online platforms are already starting to influence buying habits, and in some cases, drive customers back to the physical stores. It’s also important to note that complete figures are not available for either the number of online sales picked up in store or the amount of any add-on purchases made by the customer while picking up the online order. Add-ons are certainly the hope of the merchants offering in-store pickup, and at least anecdotal evidence says that approach may be working. 82

This year, I made a point of trying out a wide variety of onlineshopping modes and sellers, just to test the state of the process. Out-of-stocks, mis-fills and site outages are all things I experienced personally during the weekend, and I’m sure I’m not unique. Growing pains in the online marketplace, particularly as midsize companies try to win their share of the market, will influence consumer habits. Certainly, shoppers are put off by extra fuss with ordering, fulfillment and service issues. After all, online shopping is supposed to be so easy! To be fair, some companies have the process nailed down. The Wayfair shopping experience was on point for me, as was Chewy. Chewy even sent me a Christmas card after one little order! But a number of “traditional” companies are trying to add e-commerce in clumsy ways. I ordered online from Macy’s, only to find out that my “pick-up-in-store” goods took a week to reach the Macy’s near me. When I picked them up, I had to wait in the same line as customer returns and credit applications. Then my order for two pairs of shoes was presented in two boxes (because they reached the store separately), each the size of an alto sax case. So, the supposedly smooth online-to-store experience at Macy’s was cumbersome and time consuming. On the other hand, my online-to-store experience with Home Depot left me with no complaints. All of these headaches with online shopping present opportunities for our industry. I’ve been hearing from shoppers confused by the online shopping process, or frustrated because the item they found (painstakingly, because they were not familiar with our product offerings) was out of stock. Sure, with well-known commodities, selection and purchase is simple ... uh, as long as the product is in stock and not a knockoff, a counterfeit or a fraud, of course. And if the box stays on your porch after it’s delivered. So, a portion of the prodigals are returning. At the same time, experiential shopping is being touted as the way to bring additional consumers back into stores. I’ve seen media coverage of the “reinvented” mall, complete with rides, spas and other amenities. While mashups like “home-improvement escape rooms,” where you have to fix a toilet to get out, are probably not a thing yet, companies are throwing a lot of ideas around to see what sticks. Meanwhile, here we brick-and-mortar stores are, a hands-on retail experience since birth. As I’ve been saying, if we make our stores attractive, welcoming and, yes, experiential, we’ve got a chance. The stage is set: There’s evidence that people still want to shop, and that desire cuts across all demographics, from baby boomers to millennials to Gen Z. We don’t have to reinvent ourselves. We just need to let people know we’re here and welcome them. If you have a comment, feel free to share it on the Veddatorial Facebook page, and as always, post an inquiry if there’s another topic you’d like to see covered here. (Please post to the page rather than DM, so others can see the dialogue.) JANUARY 2020