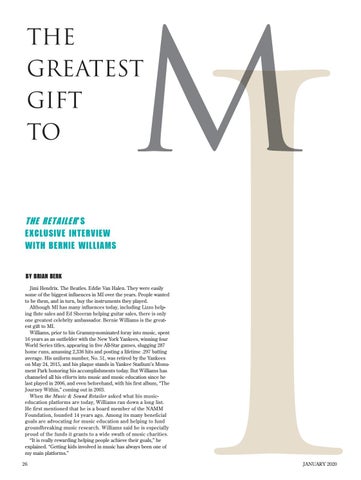 THE GREATEST GIFT TO

Jimi Hendrix. The Beatles. Eddie Van Halen. They were easily some of the biggest influences in MI over the years. People wanted to be them, and in turn, buy the instruments they played. Although MI has many influences today, including Lizzo helping flute sales and Ed Sheeran helping guitar sales, there is only one greatest celebrity ambassador. Bernie Williams is the greatest gift to MI. Williams, prior to his Grammy-nominated foray into music, spent 16 years as an outfielder with the New York Yankees, winning four World Series titles, appearing in five All-Star games, slugging 287 home runs, amassing 2,336 hits and posting a lifetime .297 batting average. His uniform number, No. 51, was retired by the Yankees on May 24, 2015, and his plaque stands in Yankee Stadium’s Monument Park honoring his accomplishments today. But Williams has channeled all his efforts into music and music education since he last played in 2006, and even beforehand, with his first album, “The Journey Within,” coming out in 2003. When the Music & Sound Retailer asked what his musiceducation platforms are today, Williams ran down a long list. He first mentioned that he is a board member of the NAMM Foundation, founded 14 years ago. Among its many beneficial goals are advocating for music education and helping to fund groundbreaking music research. Williams said he is especially proud of the funds it grants to a wide swath of music charities. “It is really rewarding helping people achieve their goals,” he explained. “Getting kids involved in music has always been one of my main platforms.” 26