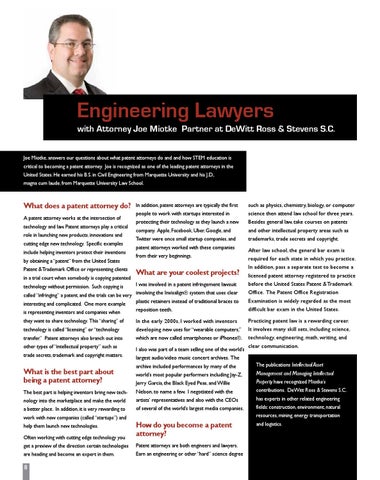 What does a patent attorney do? A patent attorney works at the intersection of technology and law. Patent attorneys play a critical role in launching new products, innovations and cutting edge new technology. Specific examples include helping inventors protect their inventions by obtaining a “patent” from the United States Patent & Trademark Office or representing clients in a trial court when somebody is copying patented technology without permission. Such copying is called “infringing” a patent, and the trials can be very interesting and complicated. One more example is representing inventors and companies when they want to share technology. This “sharing” of technology is called “licensing” or “technology transfer.” Patent attorneys also branch out into other types of “intellectual property” such as trade secrets, trademark and copyright matters.

What is the best part about being a patent attorney? The best part is helping inventors bring new technology into the marketplace and make the world a better place. In addition, it is very rewarding to work with new companies (called “startups”) and help them launch new technologies. Often working with cutting edge technology you get a preview of the direction certain technologies are heading and become an expert in them.

In addition, patent attorneys are typically the first people to work with startups interested in protecting their technology as they launch a new company. Apple, Facebook, Uber, Google, and Twitter were once small startup companies, and patent attorneys worked with these companies from their very beginnings.

What are your coolest projects? I was involved in a patent infringement lawsuit involving the Invisalign® system that uses clear plastic retainers instead of traditional braces to reposition teeth. In the early 2000s, I worked with inventors developing new uses for “wearable computers,” which are now called smartphones or iPhones®. I also was part of a team selling one of the world’s largest audio/video music concert archives. The archive included performances by many of the world’s most popular performers including Jay-Z, Jerry Garcia, the Black Eyed Peas, and Willie Nelson, to name a few. I negotiated with the artists’ representatives and also with the CEOs of several of the world’s largest media companies.

How do you become a patent attorney? Patent attorneys are both engineers and lawyers. Earn an engineering or other “hard” science degree

such as physics, chemistry, biology, or computer science then attend law school for three years. Besides general law, take courses on patents and other intellectual property areas such as trademarks, trade secrets and copyright. After law school, the general bar exam is required for each state in which you practice. In addition, pass a separate test to become a licensed patent attorney registered to practice before the United States Patent & Trademark Office. The Patent Office Registration Examination is widely regarded as the most difficult bar exam in the United States. Practicing patent law is a rewarding career. It involves many skill sets, including science, technology, engineering, math, writing, and clear communication. The publications Intellectual Asset Management and Managing Intellectual Property have recognized Miotke’s contributions. DeWitt Ross & Stevens S.C. has experts in other related engineering fields: construction, environment, natural resources, mining, energy transportation and logistics. 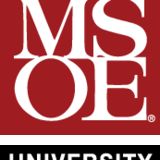 Pathways is the Wisconsin STEM/PLTW publication published by Milwaukee School of Engineering.

Pathways is the Wisconsin STEM/PLTW publication published by Milwaukee School of Engineering.