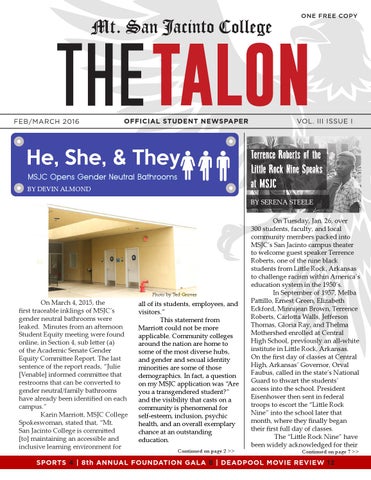 BY DEVIN ALMOND ALMOND BY DEVIN BY SERENA STEELE

On March 4, 2015, the first traceable inklings of MSJC’s gender neutral bathrooms were leaked. Minutes from an afternoon Student Equity meeting were found online, in Section 4, sub letter (a) of the Academic Senate Gender Equity Committee Report. The last sentence of the report reads, “Julie [Venable] informed committee that restrooms that can be converted to gender neutral/family bathrooms have already been identified on each campus.” Karin Marriott, MSJC College Spokeswoman, stated that, “Mt. San Jacinto College is committed [to] maintaining an accessible and inclusive learning environment for

all of its students, employees, and visitors.” This statement from Marriott could not be more applicable. Community colleges around the nation are home to some of the most diverse hubs, and gender and sexual identity minorities are some of those demographics. In fact, a question on my MSJC application was “Are you a transgendered student?” and the visibility that casts on a community is phenomenal for self-esteem, inclusion, psychic health, and an overall exemplary chance at an outstanding education. Continued on page 2 >>

On Tuesday, Jan. 26, over 300 students, faculty, and local community members packed into MSJC’s San Jacinto campus theater to welcome guest speaker Terrence Roberts, one of the nine black students from Little Rock, Arkansas to challenge racism within America’s education system in the 1950’s. In September of 1957, Melba Pattillo, Ernest Green, Elizabeth Eckford, Minnijean Brown, Terrence Roberts, Carlotta Walls, Jefferson Thomas, Gloria Ray, and Thelma Mothershed enrolled at Central High School, previously an all-white institute in Little Rock, Arkansas. On the first day of classes at Central High, Arkansas’ Governor, Orval Faubus, called in the state’s National Guard to thwart the students’ access into the school. President Eisenhower then sent in federal troops to escort the “Little Rock Nine” into the school later that month, where they finally began their first full day of classes. The “Little Rock Nine” have been widely acknowledged for their Continued on page 7 >>