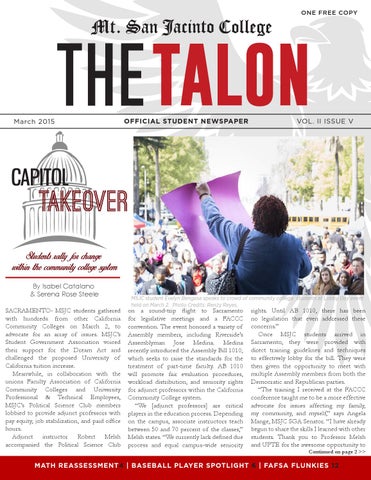 on a round-trip flight to Sacramento for legislative meetings and a FACCC convention. The event honored a variety of Assembly members, including Riverside’s Assemblyman Jose Medina. Medina recently introduced the Assembly Bill 1010, which seeks to raise the standards for the treatment of part-time faculty. AB 1010 will promote fair evaluation procedures, workload distribution, and seniority rights for adjunct professors within the California Community College system. “We [adjunct professors] are critical players in the education process. Depending on the campus, associate instructors teach between 50 and 70 percent of the classes,” Melsh states. “We currently lack defined due process and equal campus-wide seniority

rights. Until AB 1010, there has been no legislation that even addressed these concerns.” Once MSJC students arrived in Sacramento, they were provided with direct training guidelines and techniques to effectively lobby for the bill. They were then given the opportunity to meet with multiple Assembly members from both the Democratic and Republican parties. “The training I received at the FACCC conference taught me to be a more effective advocate for issues affecting my family, my community, and myself,” says Angela Mange, MSJC SGA Senator. “I have already begun to share the skills I learned with other students. Thank you to Professor Melsh and UPTE for the awesome opportunity to 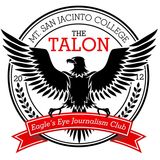 The Talon is a student publication of Mt. San Jacinto College. The paper serves 15,000 students and strives for journalistic excellence in t...

The Talon is a student publication of Mt. San Jacinto College. The paper serves 15,000 students and strives for journalistic excellence in t...