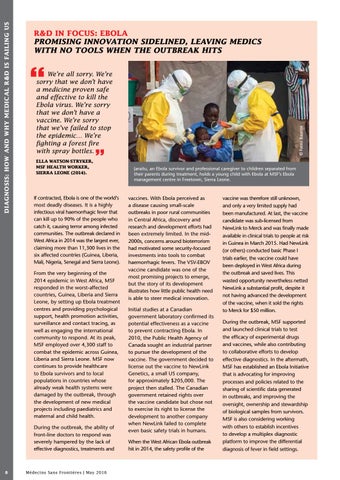 If contracted, Ebola is one of the world’s most deadly diseases. It is a highly infectious viral haemorrhagic fever that can kill up to 90% of the people who catch it, causing terror among infected communities. The outbreak declared in West Africa in 2014 was the largest ever, claiming more than 11,300 lives in the six affected countries (Guinea, Liberia, Mali, Nigeria, Senegal and Sierra Leone). From the very beginning of the 2014 epidemic in West Africa, MSF responded in the worst-affected countries, Guinea, Liberia and Sierra Leone, by setting up Ebola treatment centres and providing psychological support, health promotion activities, surveillance and contact tracing, as well as engaging the international community to respond. At its peak, MSF employed over 4,300 staff to combat the epidemic across Guinea, Liberia and Sierra Leone. MSF now continues to provide healthcare to Ebola survivors and to local populations in countries whose already weak health systems were damaged by the outbreak, through the development of new medical projects including paediatrics and maternal and child health. During the outbreak, the ability of front-line doctors to respond was severely hampered by the lack of effective diagnostics, treatments and

DIAGNOSIS: HOW AND WHY MEDICAL R&D IS FAILING US

R&D IN FOCUS: EBOLA PROMISING INNOVATION SIDELINED, LEAVING MEDICS WITH NO TOOLS WHEN THE OUTBREAK HITS

Jaraitu, an Ebola survivor and professional caregiver to children separated from their parents during treatment, holds a young child with Ebola at MSF’s Ebola management centre in Freetown, Sierra Leone.

vaccines. With Ebola perceived as a disease causing small-scale outbreaks in poor rural communities in Central Africa, discovery and research and development efforts had been extremely limited. In the mid2000s, concerns around bioterrorism had motivated some security-focused investments into tools to combat haemorrhagic fevers. The VSV-EBOV vaccine candidate was one of the most promising projects to emerge, but the story of its development illustrates how little public health need is able to steer medical innovation. Initial studies at a Canadian government laboratory confirmed its potential effectiveness as a vaccine to prevent contracting Ebola. In 2010, the Public Health Agency of Canada sought an industrial partner to pursue the development of the vaccine. The government decided to license out the vaccine to NewLink Genetics, a small US company, for approximately $205,000. The project then stalled. The Canadian government retained rights over the vaccine candidate but chose not to exercise its right to license the development to another company when NewLink failed to complete even basic safety trials in humans. When the West African Ebola outbreak hit in 2014, the safety profile of the

vaccine was therefore still unknown, and only a very limited supply had been manufactured. At last, the vaccine candidate was sub-licensed from NewLink to Merck and was finally made available in clinical trials to people at risk in Guinea in March 2015. Had NewLink (or others) conducted basic Phase I trials earlier, the vaccine could have been deployed in West Africa during the outbreak and saved lives. This wasted opportunity nevertheless netted NewLink a substantial profit, despite it not having advanced the development of the vaccine, when it sold the rights to Merck for $50 million. During the outbreak, MSF supported and launched clinical trials to test the efficacy of experimental drugs and vaccines, while also contributing to collaborative efforts to develop effective diagnostics. In the aftermath, MSF has established an Ebola Initiative that is advocating for improving processes and policies related to the sharing of scientific data generated in outbreaks, and improving the oversight, ownership and stewardship of biological samples from survivors. MSF is also considering working with others to establish incentives to develop a multiplex diagnostic platform to improve the differential diagnosis of fever in field settings. 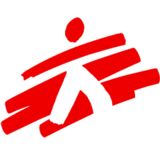 Lives on the Edge: Time to Align Medical Research and Development with People’s Health Needs

In this report, MSF illustrates how our staff and patients around the world are impacted by the way biomedical research and development (R&D...

Lives on the Edge: Time to Align Medical Research and Development with People’s Health Needs

In this report, MSF illustrates how our staff and patients around the world are impacted by the way biomedical research and development (R&D...