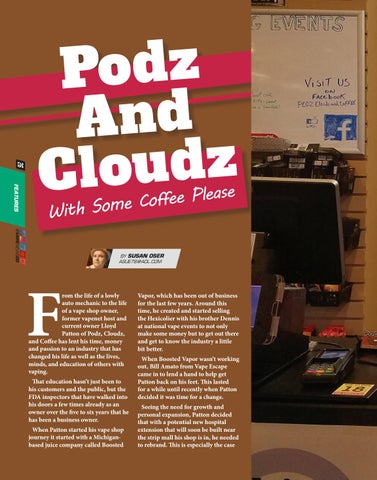 rom the life of a lowly auto mechanic to the life of a vape shop owner, former vapenet host and current owner Lloyd Patton of Podz, Cloudz, and Coffee has lent his time, money and passion to an industry that has changed his life as well as the lives, minds, and education of others with vaping. That education hasnâ&amp;#x20AC;&amp;#x2122;t just been to his customers and the public, but the FDA inspectors that have walked into his doors a few times already as an owner over the five to six years that he has been a business owner. When Patton started his vape shop journey it started with a Michiganbased juice company called Boosted

Vapor, which has been out of business for the last few years. Around this time, he created and started selling the Hexicolier with his brother Dennis at national vape events to not only make some money but to get out there and get to know the industry a little bit better. When Boosted Vapor wasnâ&amp;#x20AC;&amp;#x2122;t working out, Bill Amato from Vape Escape came in to lend a hand to help get Patton back on his feet. This lasted for a while until recently when Patton decided it was time for a change. Seeing the need for growth and personal expansion, Patton decided that with a potential new hospital extension that will soon be built near the strip mall his shop is in, he needed to rebrand. This is especially the case