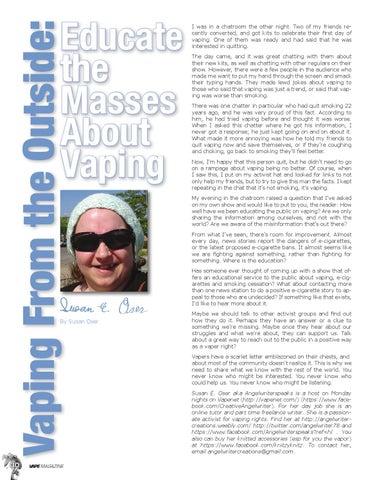 Vaping From the Outside:

Educate the Masses About Vaping

I was in a chatroom the other night. Two of my friends recently converted, and got kits to celebrate their first day of vaping. One of them was ready and had said that he was interested in quitting. The day came, and it was great chatting with them about their new kits, as well as chatting with other regulars on their show. However, there were a few people in the audience who made me want to put my hand through the screen and smack their typing hands. They made lewd jokes about vaping to those who said that vaping was just a trend, or said that vaping was worse than smoking. There was one chatter in particular who had quit smoking 22 years ago, and he was very proud of this fact. According to him, he had tried vaping before and thought it was worse. When I asked this chatter where he got his information, I never got a response; he just kept going on and on about it. What made it more annoying was how he told my friends to quit vaping now and save themselves, or if they’re coughing and choking, go back to smoking they’ll feel better. Now, I’m happy that this person quit, but he didn’t need to go on a rampage about vaping being no better. Of course, when I saw this, I put on my activist hat and looked for links to not only help my friends, but to try to give this man the facts. I kept repeating in the chat that it’s not smoking, it’s vaping. My evening in the chatroom raised a question that I’ve asked on my own show and would like to put to you, the reader: How well have we been educating the public on vaping? Are we only sharing the information among ourselves, and not with the world? Are we aware of the misinformation that’s out there? From what I’ve seen, there’s room for improvement. Almost every day, news stories report the dangers of e-cigarettes, or the latest proposed e-cigarette bans. It almost seems like we are fighting against something, rather than fighting for something. Where is the education? Has someone ever thought of coming up with a show that offers an educational service to the public about vaping, e-cigarettes and smoking cessation? What about contacting more than one news station to do a positive e-cigarette story to appeal to those who are undecided? If something like that exists, I’d like to hear more about it. Maybe we should talk to other activist groups and find out how they do it. Perhaps they have an answer or a clue to something we’re missing. Maybe once they hear about our struggles and what we’re about, they can support us. Talk about a great way to reach out to the public in a positive way as a vaper right? Vapers have a scarlet letter emblazoned on their chests, and about most of the community doesn’t realize it. This is why we need to share what we know with the rest of the world. You never know who might be interested. You never know who could help us. You never know who might be listening. Susan E. Oser aka Angelwriterspeaks is a host on Monday nights on Vapenet (http://vapenet.com/) (https://www.facebook.com/CreativeAngelwriter). For her day job she is an online tutor and part time freelance writer. She is a passionate activist for vaping rights. Find her at http://angelwritercreations.weebly.com/ http://twitter.com/angelwriter78 and https://www.facebook.com/Angelwriterspeaks?ref=hl . You also can buy her knitted accessories (esp for you the vapor) at https://www.facebook.com/knitzyknitz. To contact her, email angelwritercreations@gmail.com.